'Billions' TV Character Has Heart Attack After A Peloton Ride 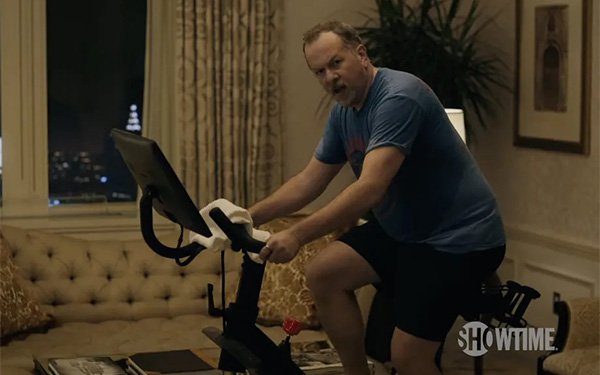 Piling on Peloton’s current problems, another character in a scripted cable TV show -- the season six debut of Showtime’s “Billions” -- had a heart attack after a Peloton bike ride. But the character, Mike Wagner, survived.

In a tweet in Sunday morning, Peloton, the digital video-fitness-subscription/equipment company, said the brand’s placement in the episode was not approved by the company:

“We get TV shows that want to include @onepeloton to get people talking, but to be clear, we did not agree for our brand or IP to be used on @SHO_Billions or provide any equipment. As the show itself points out, cardiovascular exercise helps people lead long, happy lives.”

This follows the “And Just Like That" debut in early December, in which the character of “Mr. Big, played by Chris Noth, had a heart attack and subsequently passed away on the HBO Max show.

After Mike Wagner’s recovery, he says later in the episode: “I’m not going out like Mr. Big.”

The New York Times said the episode was shot last April -- long before “And Just Like That” premiered. However, “Billions” apparently made an adjustment in post-production recently to its Peloton-related episode.

Due to a business slowdown, CNBC reported Peloton is now forced to temporarily curtail production of its Peloton Bike and Peloton Tread+ exercise machines.

In a memo to employees last week, John Foley, CEO of Peloton, said the company was working on “right-sizing” production and considering layoffs. Peloton stock price has plummeted around 80% over the past year.

health and fitness, tv
3 comments about "'Billions' TV Character Has Heart Attack After A Peloton Ride".
Check to receive email when comments are posted.
Read more comments >
Next story loading