Around Here, Syfy Is TV's Most Consistent Network 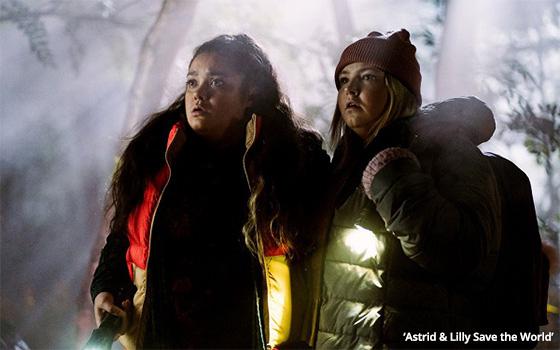 It is sheer coincidence that for the second day in a row, a Syfy channel show is turning up here in the TV Blog.

That is the nature of the beast. Sometimes TV shows come in twos. Yesterday, it was Syfy’s “Resident Alien,” returning Wednesday for its second season. Today, it’s a new one -- “Astrid & Lilly Save the World.”

Syfy has scheduled its premiere Wednesday in the 10-11 p.m. (Eastern) time slot, evidently in the hope that “Resident Alien” will deliver at least part of its audience to this new entry in the pantheon of Syfy shows.

And speaking of beasts, in “Astrid & Lilly,” two normal teens on the fringes of their high school’s social hierarchy are actually secret monster hunters who battle strange beings from an unspecified underworld.

And once again, Syfy has another very attractive and wholly original show on its hands. This makes for a kind of streak around here.

As noted a few weeks ago in a year-end wrap-up column, most (if not all) of the Syfy shows reviewed here in the past year received enthusiastic thumbs up, including “Chucky,” “Day of the Dead,” “Devil May Care” and “Resident Alien.”

This is unusual for a single network, and with the usual caveat pointing out that this is just one man’s opinion, Syfy is emerging as NBCUniversal’s brightest and best network, at least around here.

In the development and production of its shows, the network demonstrates a keen consistency. Not only are the network’s shows quirky, entertaining and different, but they possess traits that mark them as originating from the same workshop, you might say.

These traits are difficult to quantify and define, but when watching “Resident Alien,” “Astrid & Lilly” and any of the other shows mentioned above, the shows all feel like they are cut from the same cloth, and also different and distinctive at the same time.

With “Astrid & Lilly,” Syfy is once again on to something. Astrid and Lilly (played respectively by Jana Morrison, above photo, left, and Samantha Aucoin) are a dynamic duo.

Many TV shows have covered the subject of high-school teens who crave recognition and acceptance by the school society’s elite cliques.

Truth be told, there have been too many of them. But “Astrid and Lilly” is an exception. Somehow, this show takes this same theme and makes it seem new.

Astrid and Lilly would certainly like to be accepted by more of their schoolmates, but this craving is not quite the obsession for them that it is on so many other high-school shows on TV.

At the same time, these two face social ostracism and bullying because of their body types.

They are both overweight, and even in today’s supposedly more tolerant society, they are nevertheless hurtfully targeted by some of the school’s more obnoxious students.

In the series premiere, the two become reluctant hunters of various beasts and demons through a series of coincidences. In this way, they discover that they possess powers that are unique.

And while they are obligated to keep this part of their lives a secret, they gain confidence, and in the process, win our affection.

“Astrid & Lilly Save the World” premieres Wednesday (January 26) at 10 p.m. Eastern on Syfy.