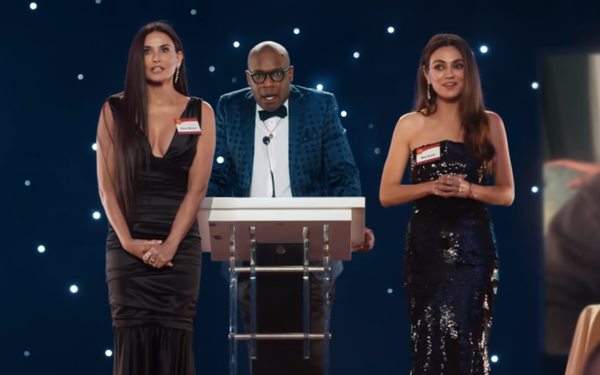 Demi Moore and Mila Kunis, the former and current wife of Ashton Kutcher, respectively, star in a Super Bowl ad for AT&T that pokes fun at the pair’s history.

In the 60-second ad, via BBDO, Los Angeles, Kunis is at a table when an announcer is ready to introduce the high school’s “most admired alum.” Kunis gets up, somewhat reluctantly, to accept. Then the camera pans to another table where Moore is preparing to go up.

As the two prepare to take the stage, the emcee announces the winner is “Anna Gomez,” who is celebrated for having fast Internet speeds. “I watch a lot of movies,” Gomez says.

As Moore and Kunis stand on the stage, Moore says she didn’t realize that the two went to the same high school (Fairfax High School in Los Angeles). “We have a lot in common,” says Kunis.

After the tagline (“Live like a GIGillionaire”) flashes, Gomez asks “Who were those women?”

Moore was married to Kutcher from 2005 to 2013. Kunis married Kutcher in 2015, and the couple have two kids together.