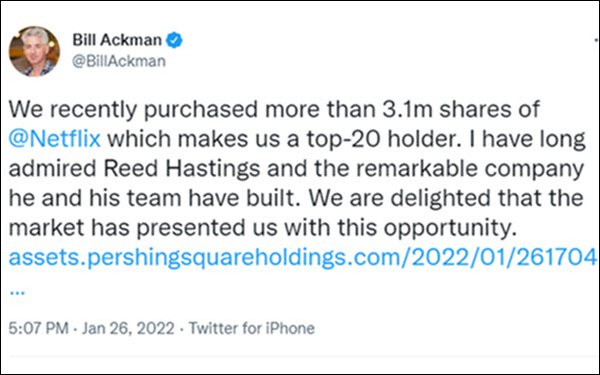 Whereas many investors have been spooked by Netflix’s unexpectedly low subscription growth forecast for the current  quarter, high-profile hedge-fund owner William Ackman sees Netflix — and the streaming business model in general — as  golden opportunities.

Ackman announced in a tweet yesterday that his fund, Pershing Square, has recently invested in Netflix for the first time, acquiring  more than 3.1 million shares, to become a top-20 investor in the company.

The shares translate to a share of about 0.68% stake, based on about 455.8 million diluted shares outstanding as of Dec. 31, according to the Wall Street Journal.

Ackerman — who became renowned and feared for taking activist positions in companies he deemed floundering — expressed nothing but praise for Netflix and confidence in its founder and co-CEO Reed Hastings.

Ackerman tweeted that he’d “long admired” Hastings “and the remarkable company he and his team have built,” adding: “We are delighted that the market has presented us with the opportunity.”

Netflix’s stock has dropped 30% since its Jan. 20 earnings call, when the company reported having narrowly missed its forecast of 8.5 million subscription adds for Q4 2021 (it added 8.3 million, for a total of 221.8 million global subscribers) and more important, forecast global growth of just 2.5 million for Q1. Netflix also acknowledged for the first time that heavy competition may be affecting its growth rate.

Ackerman elaborated on the investment move in a letter attached to the tweet, noting: “Many of our best investments have emerged when other investors whose time horizons are short term, discard great companies at prices that look extraordinarily attractive when one has a long-term horizon.”

Pershing Square “began analyzing Netflix in connection with our investment in Universal Music Group, so we were prepared when the stock price declined sharply last Friday,” he wrote. “Now with both UMG and Netflix, we are all-in on streaming, as we love the business models, the industry contexts, and the management teams leading these remarkable organizations.”

Netflix is described as “a primary beneficiary of the growth in streaming and the decline in linear TV driven by its superior customer experience, a vast and diverse amount of superb, constantly refreshed content, global improvements in bandwidth, and the proliferation and continuous improvement and convenience of devices on which one can watch.”

Its “highly favorable characteristics,” Ackman says, include its subscription-based, “highly recurring” revenues, which “have enormous future growth potential” and “truly best-in-class management team and unique high-performance culture.” The latter, he notes, was amply demonstrated by Netflix’s “remarkable pivot from DVD rental by mail, to video streaming, to becoming one of the greatest producers of beloved content ever.”

And while some analysts are predicting that Netflix’s just-announced price hikes will undermine its subscriber retention and acquisition, Ackman says the company has “pricing power derived from the enormous value it delivers to consumers compared with other alternatives.”

He believes Netflix has room for “substantial margin expansion, with the opportunity for continued improvement due to economies of scale and the company’s rapidly growing, global subscriber base,” and that its “improving free cash flow profile should allow for continued investments in growth as well as the return of cash to shareholders.”