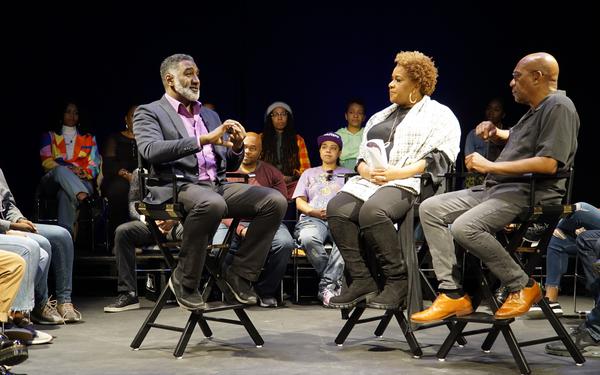 Crackle Plus, part of Chicken Soup For The Soul Entertainment, has entered into a multi-year partnership with APX Content Ventures and Publicis Media.

Among the first co-produced programs is “Inside the Black Box,” which will showcase minority artists and which is set to premiere on the Crackle streaming service in February.

The 10-episode series is hosted by Joe Morton and celebrity acting coach, casting director and producer Tracey Moore. The show will have interviews and “performance aspects” and will feature the hosts interacting with celebrity guests.

The program was brokered via APX Content Ventures, a “next-generation” unit within Publicis Media. The unit says its mission is to amplify diverse voices, empower women and build community, connection and trust.

“Inside the Black Box” is sponsored by The General, the licensed insurance agency and unit of PGC Holdings Corp., which is a wholly owned American Family Mutual Insurance Company. The General will have unique placement across various layers of the programming, both in and out of the show.

The sponsorship includes pre-roll ads, QR code integrations,  brand integration within the content and “The General Audience” branded theater section featured in the show, allowing VIP attendees to get a better view of the action and call-outs from the hosts. Outside of the programming “Inside the Black Box” will have a Crackle in-app Jumbotron where branding and voiceover sponsorship opportunities will give viewers a deeper look into The General and its services.

The program, he added, “is helping to shine a spotlight on the stories people care about and The General’s commitment to elevating diversity and greater representation is a natural complement to this program, which celebrates the world’s greatest BIPOC artists.”

The Crackle Plus networks are distributed via 60 touchpoints within the U.S., a number that is expected to grow past 80 touchpoints including RokuTV, Amazon Fire TV, Apple TV, smart TVs (Samsung, LG, Vizio), gaming consoles (PS4, XboxOne), Plex iOS and Android mobile devices at Crackle.com.