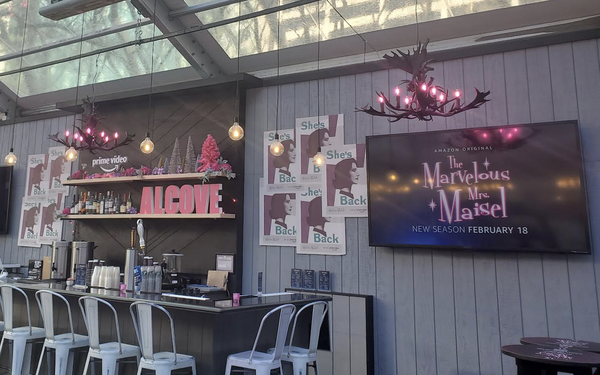 Amazon Prime Video’s dramedy “The Marvelous Mrs. Maisel”is marking its upcoming  fourth season  with a takeover of two venues at New York City’s Bank of America Winter Village at Bryant Park, set through the end of February. The show returns on Feb. 18.

“’Maisel’ has become synonymous with New York,” Jennifer Verdick, Prime Video’s head of partnerships, synergy and events, explained to Marketing Daily, ”and as Bryant Park is an iconic, beloved location in the city, it was most fitting for our team to bring Maisel to Bryant Park in an impactful way that honors the show and the city it represents.”

The Winter Village installations aim to provide an immersive experience that will reach both loyal “Maisel” fans and “spark interest” from potential new viewers, Verdick added.

For starters, Prime Video has decked out The Lodge, one of the Village’s dining and drinking venues, in pink, with “Mrs. Maisel”-branded neon signs, coasters and tabletops, photo-op-ready walls, “Mrs. Maisel” content playing on video screens,and special cocktails like a “1960s Spritz” (cranberry puree, rosemary syrup, Prosecco and orange wedge).

Yes, 1960s. The hit series about a 1950s NYC housewife-turned-comedienne turns the corner into a new decade in season four, with Mrs. Maisel (Emmy winner Rachel Brosnahan) getting “a gig with total creative freedom. But her commitment to her craft—and the places it takes her—creates a rift between her and the family and friends around her,” according to the promotional copy from Amazon.

The Lodge, which has overhead heaters, holds 256 people, with no reservations required.  But “Mrs. Maisel” has also taken over the interior decorations of the Village’s Cozy Igloos, five more intimate dining and drinking spaces that must be reserved in advance. Prices start at $200 for one to four guests, to $500 for five to eight guests.

The “Mrs. Maisel” experience in Bryant Park has been handled internally by Prime Video’s marketing team.

Prime Video has actually sponsored The Lodge and Cozy Igloos since Nov. 2. Prior to the “Mrs. Maisel” integration, which began earlier this month, the spaces were used to promote the awards-worthiness of such original Amazon films as “The Electrical Life of Louis Wain,” “My Name is Pauli Murray,” “VAL,” “The Pursuit of Love,” “Being the Ricardos,” “The Tender Bar,” “A Hero, With Love” and “Harlem.”

The Bank of America Winter Village at Bryant Park, which also includes a free ice-skating rink and other dining/drinking facilities, is now in its 20th season. The COVID-driven Igloos (for privacy and social distancing) opened last year.