Folgers Doesn't Give A Damn That It's 'Your Grandma's' Coffee 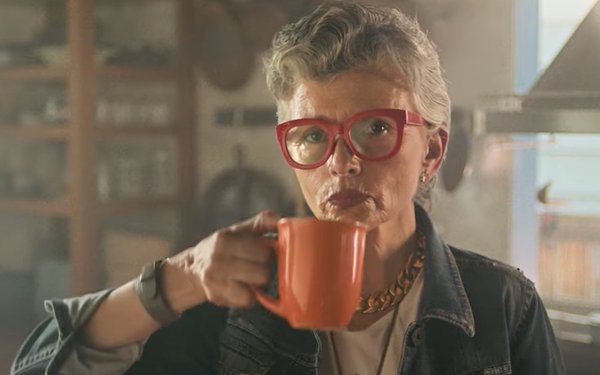 J.M. Smucker Co. says it doesn’t give a damn about the reputation of Folgers as “your grandma’s coffee”—although it would like to engage more with younger consumers.

Hence a campaign that’s a blend of rebellion—as voiced by rock music icon Joan Jett—and a paean to Folgers’ New Orleans roots, as the 170-year-old brand reintroduces itself.

To say the 1993 “Bad Reputation” hit by Joan Jett & The Blackhearts is a far cry from Folgers’ 1980’s era jingle and tagline, “The best part of wakin’ up is Folgers in your cup,” is a major understatement.

The rebellious “Bad Reputation” is repurposed in this spot from Publicis New York’s Smucker-dedicated unit PSOne. It opens with a woman eyeing red cans of Folgers on a grocery shelf.

Two younger shoppers give her a quizzical look—which she then returns as Jett blares “I don’t give a damn ‘bout my reputation” and the woman loads her cart with Folgers.

Interspersed throughout the spot are images of a denim-clad grandmother rocking to the song, Folgers employees, street denizens of New Orleans and local musician Troy Andrews—also known as Trombone Shorty—along with the superimposed words “Allow us to reintroduce ourselves.”

A shorter spot titled “Not Your Grandma’s Coffee” includes the grandmother and a voiceover that says “Heck yeah we are, and 35 million more with equally excellent taste.”

The 35 million is a reference to the number of annual Folgers drinkers, according to Publicis and PSOne chief creative officer Erica Roberts.

While core Folgers’ drinkers tend to skew older, the pandemic has opened new doors because of how consumption habits have changed.

“A lot of people who bought coffee on their way to work never brewed coffee at home and had to bring that coffee brewing ritual into their house. So a lot of people were introduced into the category because of the pandemic,” Roberts tells Marketing Daily. “Particularly younger consumers, who were so reliant on the on-the-go experience.”

Folgers is a leading employer in New Orleans, with three manufacturing facilities in the area that employ more than 750 people.

In addition to digital platforms, the spots are running on the ABC and NBC television networks along with E!, Golf Channel, Hallmark Channel, Lifetime, Oxygen and Syfy.

coffee, cpg, food
2 comments about "Folgers Doesn't Give A Damn That It's 'Your Grandma's' Coffee".
Check to receive email when comments are posted.
Read more comments >
Next story loading