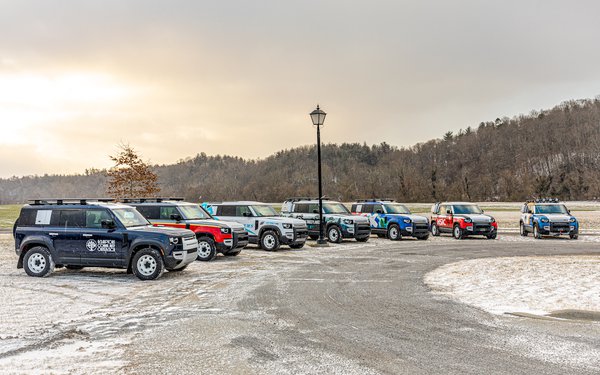 Land Rover gathered the winners of its Defender Above & Beyond Service Awards this past weekend for the big reveal.

Two representatives from each of the seven groups traveled to the Biltmore Estate in Asheville, North Carolina to see the vehicles for the first time, to learn how to use the off-road capabilities via instructors at the Land Rover Experience -- and last but not least, to meet each other and celebrate their accomplishments.

The goal of the awards is to recognize U.S.-based charitable organizations that are making a positive impact in their local community.

Land Rover created a website with information on the awards and each of the groups.

Joe Eberhardt, president and chief executive officer, Jaguar Land Rover North America, met each of the nonprofit's leaders for the first time in person at the weekend event. COVID-19 necessitated the announcement of the winners last September to be conducted via an online event which can be viewed on Land Rover's YouTube channel.

Eberhardt insists that the program is “not a marketing idea or what can we do to sell more cars” but an effort to give back to groups that have given so much of themselves during the pandemic and before.

“Every day you see these news clips of organizations helping in unexpected ways,” he tells Drive Time. “People donated their free time to help others, frontline workers risk their lives. It just became this inspiration to say ‘Is there something we can do to help with that?’”

Calling the pandemic and the country’s political upheaval a “terrible moment in our more recent past,” he says it is important to see the good in people.

“I know it sounds trite, but to see people who go out of their way to help each other -- we certainly need it,” Eberhardt says. “We are so divided in so many ways. We are divided politically, we are competing in a business perspective and it’s always winners and losers.

“This was the first moment that I can remember in a very long time where it wasn’t about that. It wasn’t about who is right and who is wrong, who wins and who loses, it’s just there is a need, and we have to help each other.”

Marit Molin, executive director of Hamptons Community Outreach, ran across the parking lot at the Biltmore and threw her arms around the hood of the vehicle. She said her group will use it to deliver food and transport construction materials and volunteers to home repair job sites.

“We have talked about the car for months but all of a sudden it was in front of our eyes,” Molin says. “It has the perfect look for us and it was an incredible driving experience on and off-road. Seeing what it was capable of doing off-road just blew our minds.”

Eberhardt says the program will help showcase the Defender's capabilities in an authentic, grassroots way.

“It’s not just a pretty-looking vehicle that is off-road capable, but you can actually do a lot of things with it,” he says. “It’s versatile, it’s functional, it helps in unexpected ways.”

Defender vehicles have been used for various humanitarian causes around the world for decades and with its recent return to the U.S., the automaker wanted to expand on that legacy. The Defender brand was around for a decade in the U.S. and then went away 23 years ago.

“I think most people in the U.S. don’t know about that part of our history,” he says. "It is a good way to position the car and provide a platform for what it can do.”

Eberhardt, who besides being president and CEO, also assumed the role of CMO after Kim McCullough resigned from the company almost two years ago, teaches brand strategy as an adjunct professor at New York University.

The company plans to tweak the program and put out another call for entries later this year, he says.