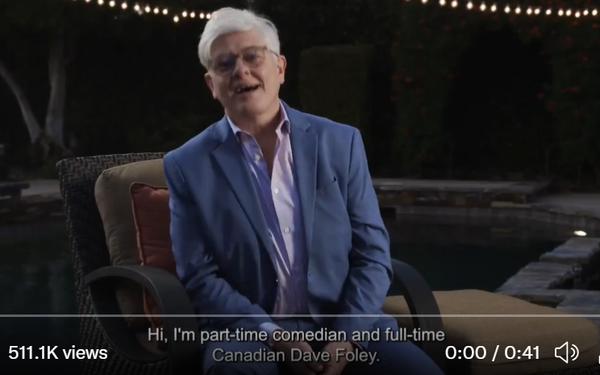 Last week Canadian comedian Dave Foley tweeted to Ryan Reynolds that he enjoys the ads that Reynolds and his agency Maximum Effort do for the Mint Mobile brand, also owned by Reynolds.

Foley asked if he could be in an ad if he became a Mint customer.

No sooner said than done—within 6 hours that same day Mint posted an unscripted Twitter ad starring Foley, apparently telling him to just go with it. Which he did.

“It all happened really fast, there wasn’t time to write anything,” Foley notes in the ad. “I’ve only been a customer for a few hours, but I got to say the service is amazing.  And the one call I made, whoa, it was …clear.”

I guess that goes to show you that if you’re like Foley and “randomly tweet at Canadian celebrities,” you just might get what you wish for. Helps to be funny, though.