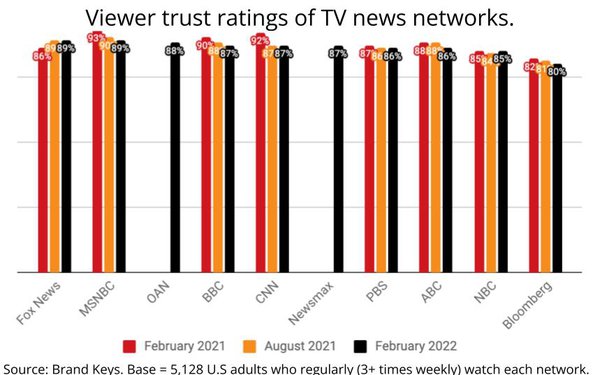 After years of tracking the relative trust regular viewers have in the TV news networks they watch, the major mainstream outlets are trending downward, while right-wing outlets are on the rise. That's the finding of the most recent semi-annual study conducted by brand researcher Brand Keys for MediaPost.

The analysis, based on Brand Keys proprietary methodology, represents surveys of more than 5,000 U.S. adults who are regular viewers (watching at least three times weekly) of each network, and it found that Fox News is ascendant, while MSNBC, the BBC, CNN, PBS, ABC, NBC and Bloomberg news programming are all waning in terms of perceived trust among regular viewers.

The most recent analysis, conducted this month, also is the first to rate right-wing news outlets OAN and Newsmax, and found they have perceived trust ratings as high or higher than any of the mainstream news outlets.

The study, which is also the first to ask regular viewers to characterize the political skews of each network, reveals that the greater the perceived political bias, the higher the perceived trust, regardless of whether they are left- or right-leaning.

“Based on this wave’s incidence levels, news viewership appears to be down across all the brands,” says Brand Keys Founder and President Robert Passikoff, adding: “We hypothesize it’s ‘news burnout.’ Too much bad news for too long, too often so viewers tune out news channels.”

In terms of the correlation between perceived idealogical skew and perceived trust, Passikoff noted that those perceptions relate to conventional consumer brands, as well as media ones.

"This wave of research reveals viewer political fervor and tribal affiliation is directly linked to trust levels. It’s axiomatic that viewers’ regularly-watched news brands align with their personal world view," he concluded, adding, "The higher the emotional engagement with a brand, the more positive behavior people exhibit. That applies to products they buy and shows they watch.” 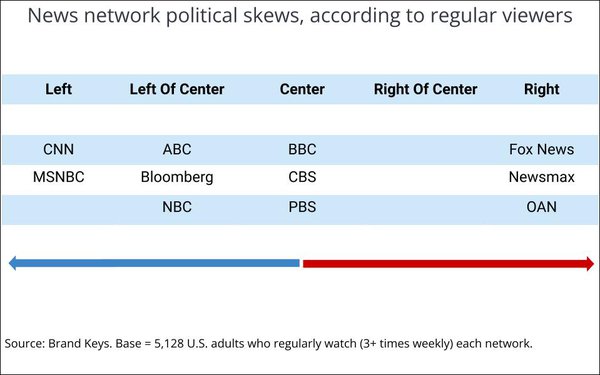