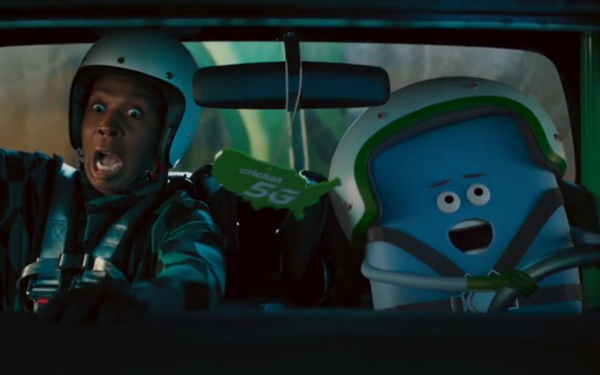 Cricket Wireless is promoting its 5G service, its $60-per-month unlimited plan and its offer of free Samsung and Motorola phones for those who switch in a series of new ads.

The effort, via Argonaut, includes a 5G spot that features a man and the Cricket mascot driving a truck that’s about to jump a row of cars, another where mascots get free phones and shoot videos at home, and one that references the song “Unbelievable” by EMF.

The song is changed to “Bundle-lievable” to get across the idea that the Cricket plan includes HBO Max and is the “ultimate bundle.”

The effort comes as the AT&T-owned Cricket now offers 5G on all Cricket plans. The wireless carrier announced in October that it had 12.4 million subscribers, an increase of more than 2 million subscribers in two years. Argonaut has been working with Cricket since 2014 “when brand perception was at an all-time low,” a blog post from Argonaut states.

The agency moved ahead with an upbeat campaign featuring the animated mascots, which “translates seamlessly across multicultural audiences,” Argonaut says.