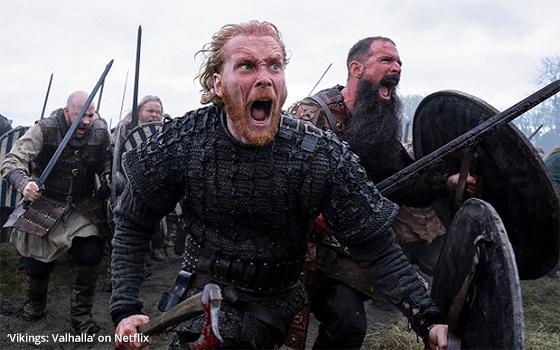 According to the Viking dramas that turn up occasionally in movies and on TV, the life of a Viking was decidedly single-minded.

In all of these motion-picture Viking tales, when they weren’t making war, the Vikings were preparing for it, which included listening to a lot of rousing speeches about honor and then shouting hurrah with their swords and battle axes in the air.

I lost count of how many of these scenes occurred in Episode One of a new Viking drama coming to Netflix on Friday (February 25).

Its title, “Vikings: Valhalla,” was likely coined to distinguish itself from “Vikings,” the well-regarded Viking series that aired on the History Channel starting in 2013.

“Vikings: Valhalla” takes place around the beginning of the 11th century (the 1200s). At this time, according to the show’s backstory, much of the Viking nation had been living in villages positioned more or less in the same area of England for a hundred years after migrating there for various reasons.

But as the show opens, the English king has decided he doesn’t want any Vikings on his island and he orchestrates a massacre.

The surviving Vikings then sail off to Norway, where they spend a year assembling a great army in order to sail back to England to wage a war of revenge.

Hence the rousing speeches and other scenes of preparation such as the provisioning of their crude ships with deer meat and honing the edges of their swords, axes and knives to razor-like sharpness.

All of this prep work suggests that some great, bloody action is still to come. But even in the preparation stage, there is conflict in Episode One that leads to some brawling and in at least one instance a fatal casualty.

If there are any central characters among this great Viking host who are the focus of the show, then it is a small band of hardy Vikings who have suddenly arrived on the shores of Norway after a brutal, stormy voyage across the ocean all the way from Greenland.

They are part of a subgroup of Vikings who migrated to Greenland so long ago that they are ignorant of the ways and lifestyles of their Viking brethren across the sea. So why have they come? That is a revenge story all its own.

When I preview some new shows such as “Vikings: Valhalla” in advance of their airdates, I often come away with no idea of whether or not these shows will draw audiences who will return to the series or initiate a binge after Episode One.

I happened to like “Vikings: Valhalla,” despite forming the impression early on that this show -- and all of the other Viking movies and TV shows that have come along over the years -- really have no conception of the real lives of Vikings.

Instead, they have adhered to a stereotype of Vikings as people who live for war and nothing else.

But this becomes a minor concern once “Vikings: Valhalla” gets underway, and the Vikings set sail for their mission of destruction.

In much the same way that the Vikings are spoiling for war, Netflix subscribers can now spoil for entertainment.