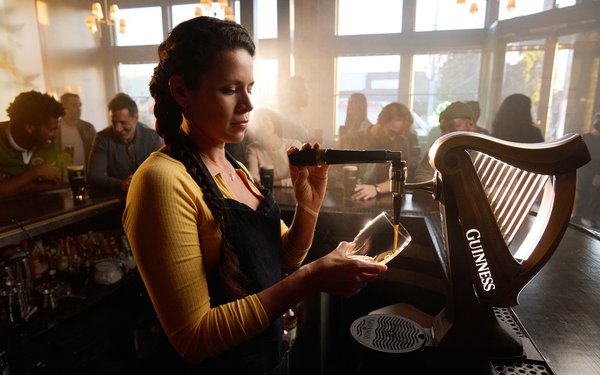 Image above: Current Guinness ad aims to get bar-goers excited about in-person camaraderie.

The weeks after the Super Bowl are typically among the slowest of the year. In 2022, we’ve seen the usual rush of Super Bowl advertisers, but now, in late February, we’re experiencing a lull.

This is the time  when marketers generally take a break and gear up for March Madness, Easter and the warmer months. That said, some advertisers do release campaigns during this time. A look back at last year’s crop:

Apple’s iPhone 12 “Fumble,” which shows a woman dropping her phone and then watching as it remains intact, thanks to a ceramic shield

Powerade’s “Power in Numbers” ad, which included new packaging that sported numbers from 0-99, letting athletes match their number with the one on the bottle.

Meanwhile, this year, Guinness broke a campaign in mid-February that looks ahead to St. Patrick’s Day, celebrating all the “people, pubs and pints” that we’ve missed.

In addition, Apple generally releases its new products in March or April and this year, the company plans to release a third-generation iPhone SE, according to Taiwanese research firm TrendForce.

Automobile makers are also getting ready for . The Ford F-150 Lightning’s release date is set for spring 2022 as is the 2022 Hyundai Santa Cruz and the 2022 Lexus LX and the 2022 Nissan Ariya and the 2022 Subaru WRX. Still, right now, the calendar seems slow.

Allen Adamson, cofounder of Metaforce, said this time is typically a dead period for marketing. “It’s sort of the dark end of winter and probably waiting for the Academy Awards,” he said. “There’s not a lot going on in people's lives. They're usually just doing their routine now."

Alan Siegel, chief executive of Siegelvision, said the times are so unprecedented that he has trouble drawing comparisons. “It’s an off year and it’s weird. All I can say is, it’s hard to make any generalizations now,” he said.