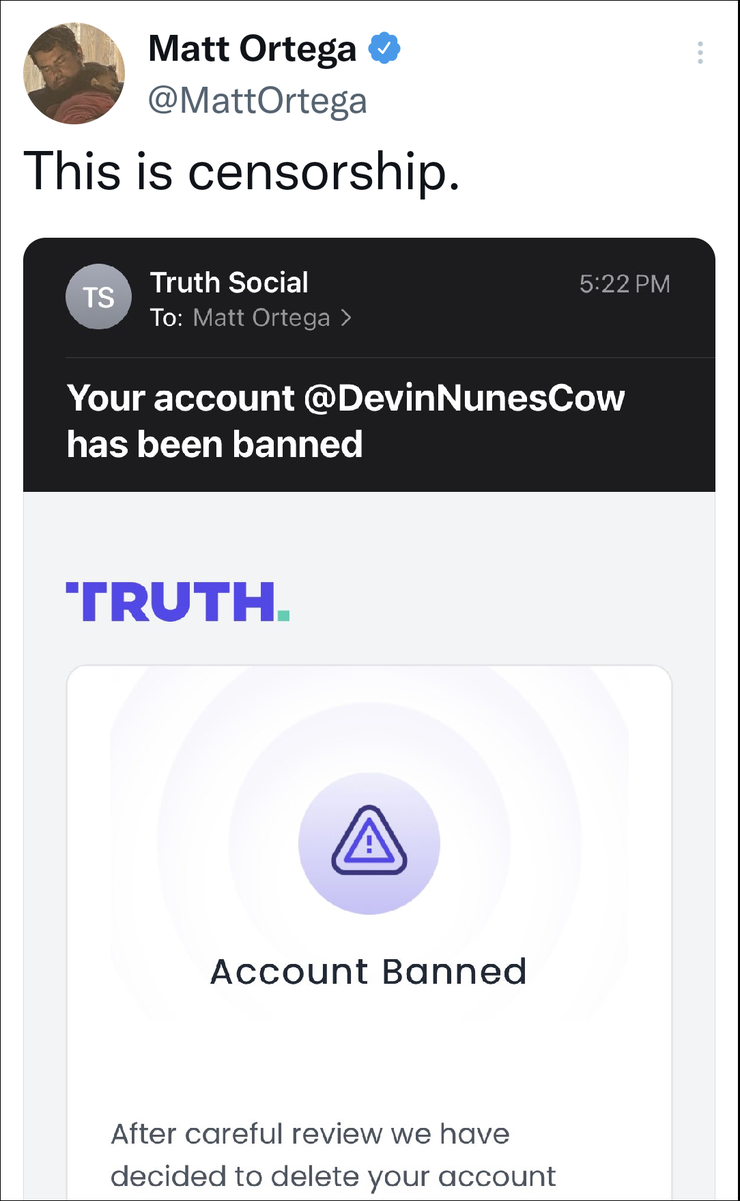 Developer Matt Ortega tweeted Tuesday that he attempted to create an account with the username @DevinNunesCow, only to be banned for violating the Truth Social guidelines. The handle obviously referred to the Twitter parody account @DevinCow, which criticized former Rep. Devin Nunes, a Republican from California, with tweets like “Devin’s boots are full of manure. He’s udder-ly worthless and it’s pasture time to mooove him to prison.”

Truth Social, currently available on Apple's App Store, describes itself as a “big tent,” and says it encourages “an open, free, and honest global conversation without discriminating against political ideology.”

But its terms of service provide plenty of wiggle room. Among other provisions, the app reserves the right to remove or change usernames that are “inappropriate, obscene, or otherwise objectionable.”

While it's probably not surprising that a company run by Nunes would take issue with the @DevinNunesCow username, it's worth noting that Trump himself repeatedly argued -- almost certainly wrongly -- that Twitter (along with Facebook and YouTube) violate the First Amendment by enforcing their editorial standards.

Trump, who largely relied on Twitter to rally his followers, is still pursuing a lawsuit against that company (as well as Facebook and YouTube) for supposedly infringing his free speech rights by banning him.

In fact, just days before Truth Social reportedly blocked Ortega's parody account, Trump's lawyers tried once again to convince a federal judge that Twitter should be obligated to restore the ex-president's account. In papers filed Feb. 16, the lawyers contended that Twitter is a “common carrier” when it solicits and hosts third-party content, and that its ban of Trump violated the First Amendment prohibition on censorship.