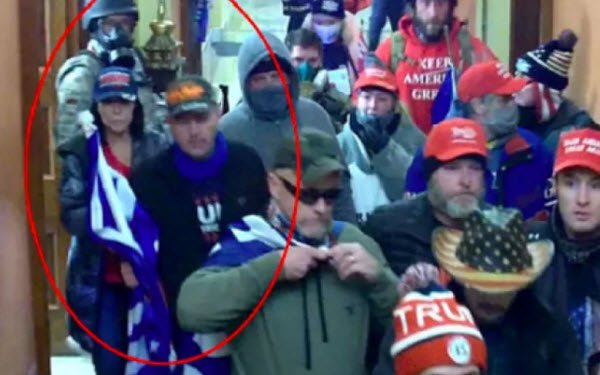 Carol Kicinski, a gluten-free chef who has been appearing monthly on the nationally syndicated “Daytime” show produced by Tampa-based NBC affiliate WFLA since July 2009, has been arrested on charges related to the Jan. 6 insurrection at the U.S. Capitol.

According to court papers, Kicinski and Jon Heneghan, who lives with her in her Dunedin, Florida home, are alleged to have broken laws prohibiting knowingly entering or remaining in a restricted building or grounds without lawful authority and attempting to impede or disrupt the orderly conduct of government business or official functions.

The case, which is being prosecuted in Washington federal court, is reportedly based on GPS data from a mobile device, found by an FBI agent, that allowed for tracking the defendants’ movements, along with video footage purportedly showing them inside the Capitol. In the FBI-submitted footage (still shown above), the woman said to be Kicinski is wearing a “Trump” hat.

According to government officials, more than 750 people across nearly all 50 states have been arrested for crimes relating to the attack on the Capitol, and more than 235 have been charged with impeding or assaulting members of law enforcement.

According to the WFLA/Channel 8 website, Florida leads the nation in the number of those charged for participating in the deadly riot that temporarily stopped the counting of the electoral vote and led to the second impeachment of former President Donald Trump,” with a total of 52 charged from the state as of late June 2021.