Netflix Doc Is Definitive Biography Of Warhol And His World 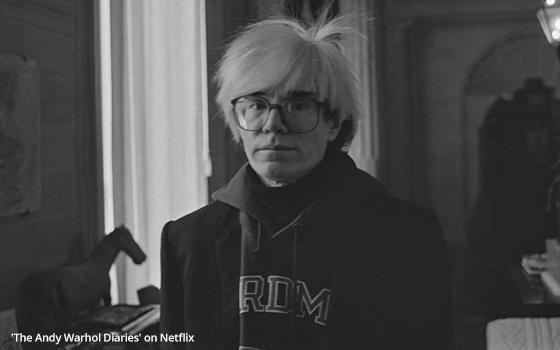 The debate about Andy Warhol and his art is hopefully over by now, but it was a recurring topic of discussion in his 1960s and 1970s heyday.

The issue boiled down to this: Was Warhol’s adoption of a painting style that glorified pop-culture icons and the packaging and labeling of everyday grocery items art or just play-acting at art?

This and other questions about the public and private Warhol are given the four-star, in-depth documentary treatment in a new six-part docuseries coming to Netflix on Wednesday. It is sensational.

Titled “The Andy Warhol Diaries,” this documentary from producer Ryan Murphy leans heavily on private diaries Warhol kept that were published after his death in 1987.

In the documentary, portions of the diary are recited aloud in Warhol’s voice -- an effect achieved with artificial-intelligence software capable of taking the recorded voice of Warhol from TV interviews and then applying the qualities and tone of his voice to the reading of his diary entries.

Among this documentary’s many attributes is its re-creation of the lost world of New York in the ’60s and ’70s.

Like the best documentaries, this is not achieved with cheap, cheesy reenactments. Instead, vintage photos, film and newspaper front pages, painstakingly assembled and meticulously edited, bring Warhol and his world vividly to life.

The documentary drives home the point that Warhol could be found at the very center of the era’s nightlife and art happenings as he broke boundaries in painting, film and performance art.

He was a prolific producer of paintings based on images from Hollywood, newspapers and other sources.

Everybody is familiar with his multicolored canvases featuring the faces of Marilyn Monroe, Elizabeth Taylor and Jackie Kennedy, along with his giant portraits of Mao Tse Tung, Elvis Presley and others.

And everyone knows his famous Brillo boxes and Campbell’s Soup cans. (According to the documentary, the young Andy Warhol -- real surname “Warhola” -- loved Campbell’s Tomato Soup when he was a boy growing up in a working-class neighborhood in Pittsburgh.)

But as this documentary amply demonstrates, Warhol’s interests ranged far wider than the worlds of celebrities and soup cans. Indeed, his subjects encompassed everything about the contemporary world that fascinated him.

These included tabloid front pages, incidents of violence seen in newspaper half-tones and even a famous series of paintings of an electric chair.

Warhol’s performance art was his life itself. He was the quiet eye of a creative storm as he populated his storied New York studio -- which he called The Factory -- with creative types drawn from the fringes of society.

At its heart, “The Andy Warhol Diaries” is a search for the real Andy Warhol who the documentary insists presented a public image that masked an inner life characterized by turmoil over his sexual orientation.

But at the same time, the documentary shows us that he lived freely as a gay man among his diverse friends, working associates and Factory hangers-on.

But he was never “out” in the way that word is defined today. He never made any bold, public declarations about his sexual life or orientation and even deflected questions about it in interviews seen in the documentary.

His reluctance to go public with his sexual orientation is criticized by some in the documentary, but it can also be seen as something much simpler -- i.e., he seemed to be a guy who valued his privacy and preferred to let his work speak for itself.

So, to return to the question that started this blog: Was it art? I don’t think there is anyone today who doubts it.

Moreover, it should be obvious to anyone working in any visual media today that Warhol revolutionized the way we see and depict our world.

His career represents a clean and abrupt departure from the past. After Warhol, everything was different.

Earlier in this TV Blog, Warhol’s celebrity subjects were described as “icons.” The fact is, such images were never considered “iconic” until Warhol came along and made them so.

art, netflix, streaming, television
1 comment about "Netflix Doc Is Definitive Biography Of Warhol And His World".
Check to receive email when comments are posted.
Next story loading