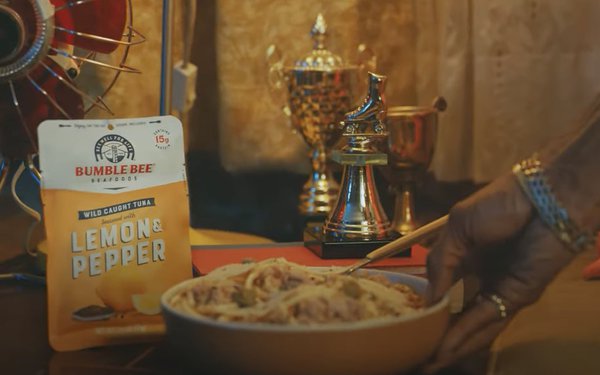 The latest installment of Bumble Bee Seafoods’ tuna-focused communications mission is a mix of education and facilitation.

Its new “Good For You” campaign casts a wide net to promote tuna’s health attributes and inspire new usage ideas.

In 2020, the 120-year-old seafood brand showcased the culinary and nutritional aspects of tuna—as in “lean, protein-fueled energy”—while encouraging people to rethink shelf-stable tuna with a campaign titled “Yes! Bumble Bee!”

“What we learned from that and other research is that not just millennials, but consumers as a whole are foodies. They want to see versatility and taste,” Vice President and head of marketing Jeanine Lewis Canales tells Marketing Daily.

The previous campaign was a factor in the brand’s recognition as one of consumer research firm YouGov’s “Most Improved U.S. Brands for 2021,” according to Canales.

The campaign also contributed to a 6% sales lift in the company’s “preference markets” of Atlanta, Charlotte and Richmond, notes Canales. “Those three markets were the ones in which we were really trying to change the narrative and strengthen the Bumble Bee brand meaningfully,” she says.

Although a major target of the latest campaign is millennials, a wide range of age and ethnicities are portrayed in this video from The Many agency.

“We wanted to make sure the ‘Good For You’ campaign could show up in relevant and memorable ways across different cultural heritages—to race and even to geographic relevance,” adds Canales.

This Hispanic-themed “Game Night” spot touts “croquetas with omega-3’s” as a dipping snack made with light tuna in water.

Not shown in the campaign are three Quick Catch tuna bowls Bumble Bee will launch in June to further facilitate the consumption of tuna.

Quick Catch bowls are ready to eat “protein meal solutions” that “fit the needs of that hurried person who still wants to eat well even in the narrow fractions of their time,” says Canales. “It’s a format that does not exist in the category.”

The brand also is expanding its pouches with the addition of apple-wood-smoked and Mediterranean flavors.