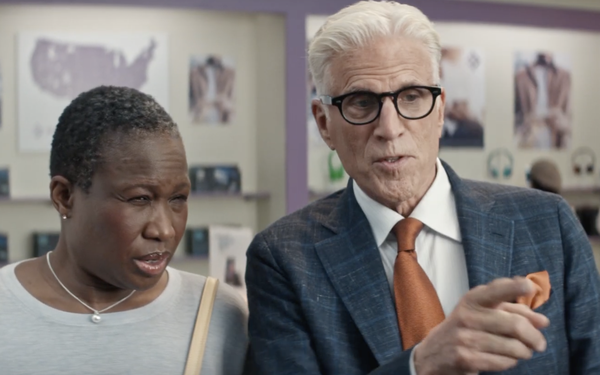 Consumer Cellular, the wireless service that targets the 50+ demographic, is taking aim at AT&T, Verizon and T-Mobile with a Crispin Porter Bogusky campaign that promises “the exact same coverage as the nation’s leading carriers, starting at $20.”

Two :30 spots, running on major broadcast networks, feature one of TV’s most venerable stars: 74-year-old Ted Danson, who won two Emmys for “Cheers” in the ‘90s and currently stars in NBC’s “Mr. Mayor.”

In “Same Map,” Danson helps out a woman who’s being pitched a “premium” cellular plan by a store salesperson. “What does that mean?” she asks. “I think it means it costs more,” Danson replies.

In “Stuff,” a couple is pitched a mobile plan that not only offers “unlimited talk, data and text,” but also “six hotspots, concert coupons, cable subscription, dental cleanings” and more. “Do we need all that?” the couple asks.  “You should use Consumer Cellular,” says Danson. “They have everything you need, nothing you don’t.”

Both commercials include a tag for Target.

“They are meant to rebuff the big carriers’ need to confuse and oversell their services," the brand told Marketing Daily. “We are presenting wireless as straightforward and simple -- clearing up a few myths along the way.”

When Consumer Cellular claims to offer the same coverage area as the big guys, it’s because it does: the company’s phones use either the AT&T or T-mobile network.

The TV spots are part of a larger campaign -- running through year’s end and also featuring Danson--  that includes digital, social and print media.

Crispin Porter Bogusky worked with production company Arts & Sciences on the commercials, using the Association of Independent Commercial Producers’ Double The Line initiative to include BIPOC (Black, Indigenous, and people of color) talent.

Earlier this year, for the 12th straight year, J.D. Power named Consumer Cellular as the top wireless provider in terms of customer care and purchase experience. The 27-year-old company offers a 5% discount to AARP members.