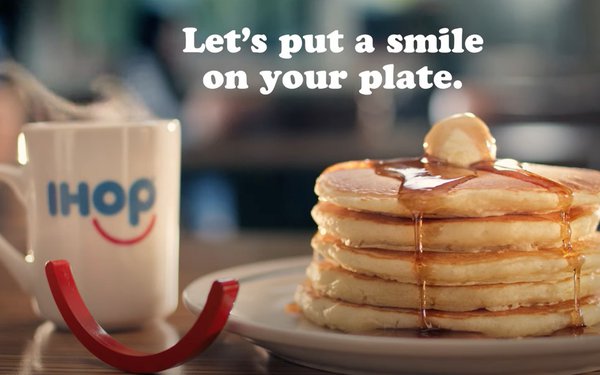 Family dining chain IHOP has launched a brand refresh titled “Let’s Put a Smile on Your Plate” that focuses on freshly cooked meals, togetherness and staffers who deliver service with, yes, smiles.

Spots breaking today from IHOP’s new agency, Pereira O’Dell, juxtapose scenes of on-premises cooking and dining with takeout orders—all accompanied by an updated version of the song “When You’re Smiling.”

The iconic red smile from the chain’s logo is a recurring element in the creative.

The new brand positioning derives from research conducted by IHOP prior to issuing RFPs for a new agency, according to chief marketing officer Kieran Donahue.

“For the last several years, we’ve spent a lot of time focused on limited time offers—but  the majority of what we sell is our core menu,” Donahue tells Marketing Daily. From the research emerged “our True North—which we call the recipe for joy.”

The recipe’s ingredients include more than 90% of menu items cooked from scratch, an environment that nurtures togetherness among families and friends, and friendly staffers.

“Those insights really led us to a place where we said, we need to focus on the core of what we do,” says Donahue.

“Kieran and her team had a very thoughtful and focused brief. There weren’t a lot of questions left to be answered in terms of what their thought was for the next step of IHOP,” says Pereira O’Dell chief creative officer Robert Lambrechts.

Working with its music partner, Beacon Street, the agency modernized “When You’re Smiling,” which many people relate to the version performed by Louis Armstrong in the late 1920s.

“Instead of just using that and sort of looking backwards, we wanted to redo it with a more modern feeling and vibe to it,” Lambrechts adds.

Over the next few weeks, three IHOP social media influencers will distribute PanCoins to fans on their channels and will donate up to $50,000 each to a charity of their choice.