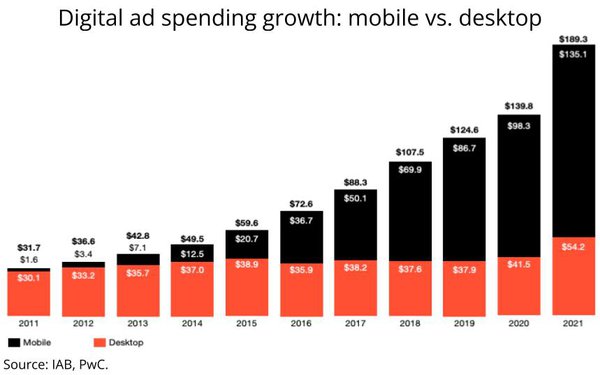 The headline in the Interactive Ad Revenue Report released earlier this week by the Interactive Advertising Bureau was that digital ad spending surged 35% in 2021. The Mobile Insider's subhead is that the mobile part of that rise grew at an even higher rate (37%). More importantly, the upsurge reversed a three-year trend of decelerating growth: 13% growth in 2020 vs. 24% in 2019 vs. 40% growth in 2018.

Part of mobile's deceleration in recent years was likely due to saturation and the law of big numbers, but its resurgence is likely due to a combination of factors that may prove more sustainable, at least for the next few years.

One is the overall boon from the acceleration of "digital transformation" that happened following the COVID-19 pandemic. Many brands that had been sitting on the sidelines have been forced to retool their media strategies -- and interfaces -- especially ecommerce ones, and many of these changes likely were "mobile-first" decisions.

Another, more endemic media factor, is likely related to a digital content format -- audio -- and the fact that the smartphone continues to replace all other audience listening devices as the audio content source of choice. I mean, even automobile audio is now routinely being run by jacking -- or Bluetoothing -- mobile devices into the car's audio system.

"Just like other ad formats, digital audio ad revenues are growing faster on mobile devices compared to the desktop," it continues, noting that podcasts in particular have become a big driver of digital audio ad spending.