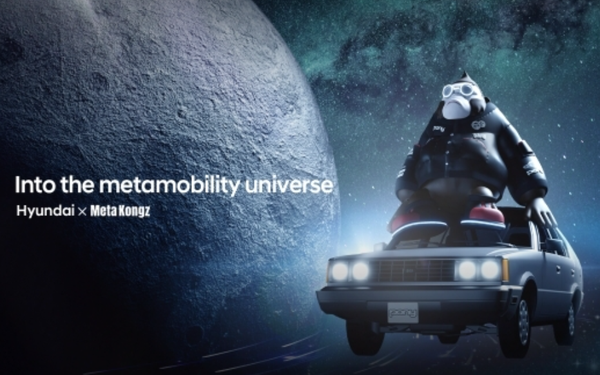 Hyundai Motor is entering the “community-based” Non-Fungible Token market, including a website and channels on Discord and Twitter.

Hyundai Motor will issue 30 limited NFTs celebrating the release of a short film that reveals its collaboration with “Meta Kongz,” the NFT brand.

The Hyundai NFT community will provide its users with the Hyundai brand experience in the metaverse by sharing NFTs depicting its mobility solutions. The Hyundai NFT Discord and Twitter channels opened on April 15, and the official NFT website is scheduled to open soon in May.

The automaker released a short film introducing its NFT universe “Metamobility universe,” reflecting a concept it revealed at CES 2022. It shows the “Meta Kongz” gorilla character driving in both a classic PONY and modernly reinterpreted heritage series PONY from earth to the moon, visualizing how mobility solutions can transcend time and space. The film also teases a shooting star-shaped NFT planned for a May release.

Hyundai joins sibling company Kia America, which launched its own NFT initiative early this year. It was linked to its “Robo Dog” Super Bowl TV spot and a partnership with Petfinder Foundation, per Russell Wager, vice president, marketing, Kia America.

The Kia effort has already raised more than $70,000 for the Petfinder Foundation, Wager told Marketing Daily during an onstage Q&A that was part of MediaPost’s Marketing:Automotive conference at the New York International Auto Show.

In addition, a 10% royalty is written into the smart contract on the blockchain, so whenever a “Robo Dog” NFT across the series is resold on a participating secondary market, the Petfinder Foundation will again benefit and receive funding for additional pet adoptions.