'Man Who Fell To Earth' Is An Alien Immigration Story 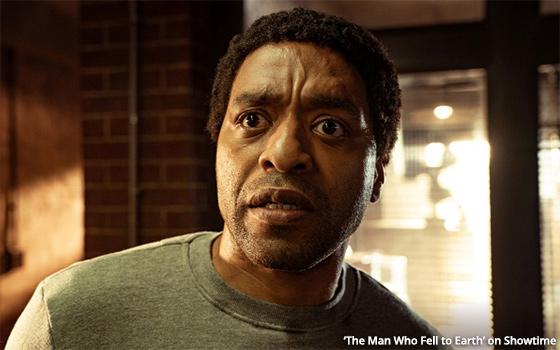 The new Showtime series about an alien who literally falls to Earth is positioned at the outset as an immigrant-refugee story.

The title is “The Man Who Fell To Earth,” and it is inspired by the 1976 movie of the same name in which David Bowie starred as the strange visitor from another planet.

But as multi-episode TV series can do, the adaptation premiering Sunday has 10 one-hour episodes in which to tell its story, while the movie clocked in at just under two hours and 20 minutes.

In the series, Chiwetel Ejiofor (pictured above) plays the alien who we first see crawling out of some sort of space conveyance after crashing in a remote southwestern desert.

Before his emergence onto terra firma, his body transforms from his alien shape into a human one in an effort to adapt to this unfamiliar world. But his physical appearance aside, he emerges with no name, no clue and no clothes.

The origin story of this stranger is told by him -- that is, a present-day version of him who has apparently achieved great wealth and fame as some sort of tech titan.

In the show’s opening scene, the stranger -- who adopted the name “Faraday” shortly after his naked emergence from the desert -- is seen speaking to a packed theater of evidently adoring fans.

It is in this venue that he begins to tell the tale of how he came to Earth some time earlier (Weeks? Months? Years?) and rose to prominence in the human world after starting literally from nothing.

While “The Man Who Fell To Earth” is decidedly a science-fiction story, it is Faraday himself who positions his journey from the desert to this theater stage as the story of an immigrant and refugee.

Indeed, as if to drive the point home, his entry point into the United States (and the human world in general) is a desert in New Mexico -- the same kind of challenging terrain we associate with immigrants, fugitives, refugees and asylum seekers who try and enter the United States every day in the southwest.

A science-fiction immigration story is one way to position “The Man Who Fell To Earth,” but the description would be meaningless if the show was a dull, unwatchable bore -- which it definitely is not.

In the premiere episode, Faraday’s antisocial behavior puts him at odds with ordinary people about every five minutes or so.

Some of these combustible situations are defused by a woman who becomes a reluctant companion to Faraday as he embarks on a mysterious mission to which he was assigned back on his home planet.

Naomie Harris plays the woman. Clarke Peters plays her ailing father and Bill Nighy rounds out the cast as an alien who arrived on Earth decades before with origins similar to Faraday’s.

The Nighy character has the same name as the Bowie alien in the 1976 movie, which brings this new sequel series back full circle to its own origin story.

“The Man Who Fell To Earth” premieres Sunday (April 24) at 10 p.m. Eastern on Showtime.