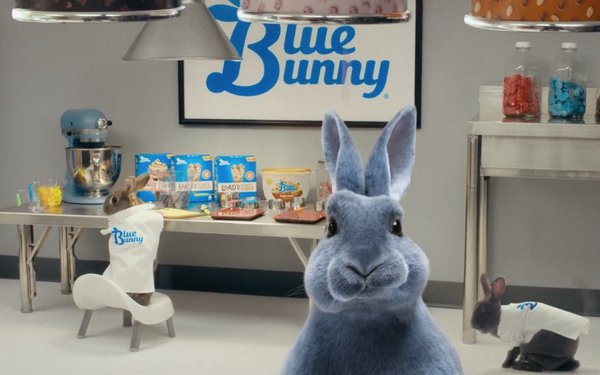 The concept is brought to life in a new campaign in which people who visit a low-ceilinged Blue Bunny headquarters act less mature than the real rabbits who supposedly run the place.

“We Make Fun” is the culmination of work that began last year with a new marketing team at Blue Bunny, updated consumer studies and the selection of a new agency of record, Observatory.

Previously, the brand had viewed its users as wanting to have fun—but with other things always getting in the way, according to Jeremy Hrynewycz, brand marketing director at Blue Bunny parent Wells Enterprises Inc.

“Fun was a part of life. But [consumers] were conflicted, felt they had too many priorities, and didn’t always have the time to have fun. So they almost needed somebody else to instigate it for them,” Hrynewycz tells Marketing Daily.

“Our current consumer is all about having fun in life—trying new things, having a good time—preferably with family and friends, and looking for a partner in crime. In our case, a partner in fun to help live life to its fullest.

“We don’t define fun for our consumers. We simply defend, champion and enable it for them.”

In one spot, titled “Office Tour,” humans get a bunny’s-eye-view of operations while walking in a crouch because of the low ceiling.

A man who tries a Twist Cone is so excited he stands upright—only to punch a hole in the ceiling of a second-floor office inhabited by rabbits seated in cubicles.

In “Focus Group,” four adults sampling sweets on miniature chairs babble away as a rabbit in another room tries to take notes.

“We had lots of ideas, but we kept coming back to the idea of a company run by actual, real bunnies,” says Observatory chief creative officer Linda Knight.

“It’s part ‘Charlie and the Chocolate Factory’, part ‘Being John Malkovich’ and part ‘The Office.’”

In addition to social media platforms, the campaign is running across linear and connected-television networks, audio on Spotify, Pandora and iHeart Radio and outdoor ad placements.