Netflix's Cancels Leapt By 1M in U.S. Alone In Q1 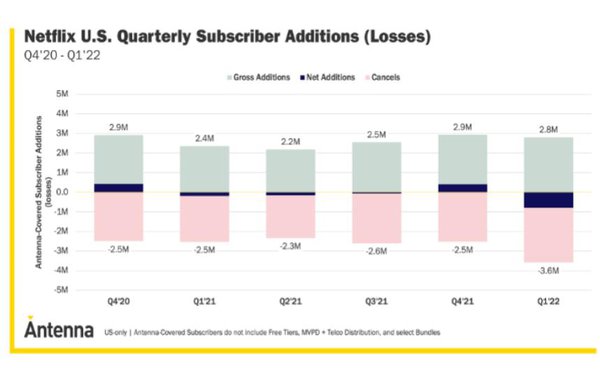 Netflix suffered 3.6 million cancels worldwide in the latest quarter — up dramatically from 2.5 million cancels in both Q1 2021 and Q4 2021, Antenna’s transaction-based data show.

U.S. gross additions have actually remained fairly stable—fluctuating between 2.2 million and 2.9 million between Q4 2020 and coming in at 2.8 million in the latest quarter.

But the adds couldn’t make up for the 1-million spike in cancels after Netflix raised its prices by $1 to $2 per month in January.

Not surprisingly, given the cancel rate, the period also saw Netflix’s U.S. active monthly churn rate rise by 0.95 points month over month in Q1, to 3.3% by the end of March.

The last time Antenna saw a similar spike in Netflix churn was in September 2020, when the service was the target of social media criticism and boycott calls after it released a controversial film, “Cuties.” That briefly raised Netflix’s churn rate to 3.6%. 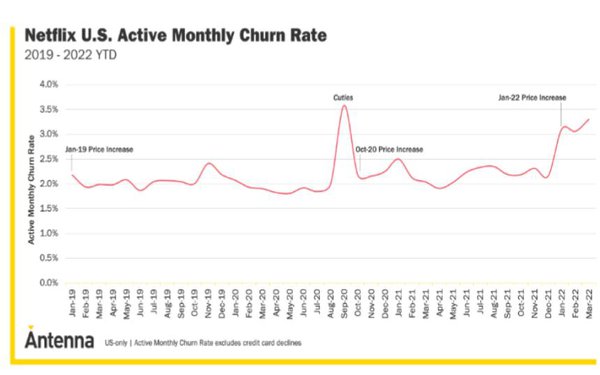 That aside, Netflix has for years maintained the lowest churn rate in the industry, averaging about 2.4%.

It remains to be seen whether the latest price hike, combined with greatly heightened competition, will make higher churn an ongoing reality for the subscription-based video-on-demand giant — but Netflix’s own projection that it will also lose 2 million net subscribers in Q2 certainly indicates that it expects higher churn to linger for some time.

“As a whole, Netflix's performance this quarter suggests increased price sensitivity amongst its subscriber base, likely heightened by the abundance of consumer choice and proliferation of other services,” sums up Brendan Brady, Antenna’s media and entertainment lead.