Smartphones Reach A Tipping Point: Most Couldn't Care Less About Them 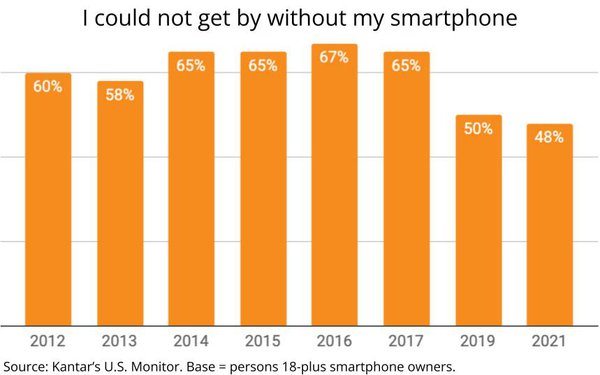 That's the finding of the latest research from Kantar's U.S. Monitor, which has been asking that question since 2012. And after years of hovering around two-thirds of smartphone owners, the percentage who say they could live without it has fallen to 48%.

The finding might seem ironic, if not counterintuitive, given that people can do more things with and would seem more reliant than ever on their smartphones, especially as usage increased during the COVID-19 pandemic -- but it's probably more of a sign that people are simply burning out on their phones.

"This drop likely indicates a lack of enthusiasm rather than decreased usage or dependence on the device," says a Kantar spokesperson, adding, "In other words, it appears Americans’ love affair with their phones has tempered over time as they’ve gotten used to the tech."

We can debate whether that is a good thing or not, but I would argue it's a healthy shift, given years of findings about the media addictions and anxiety disorders associated with mobile phone usage over the past couple of decades.

Meanwhile, another Kantar finding suggests it may not just be burnout, but may also be a form of wear-out, as recent versions of smartphone devices appear to lack "differentiation."

More than half (56%) of American smartphone owners say they are "all pretty much the same," according to Kantar. Interestingly, that finding is consistent across all cohorts -- from Gen Z to Boomers.

“It’s fair to interpret this data as people taking smartphones for granted,” says Jeff Howanek, vice president and associated head of Kantar's U.S. Monitor, adding, “For so long this space has been defined by groundbreaking development and speed, but as the technology matures the subsequent incremental innovation isn’t going to have the same impact on the consumer mindset even though the tech itself is still pretty impressive.” 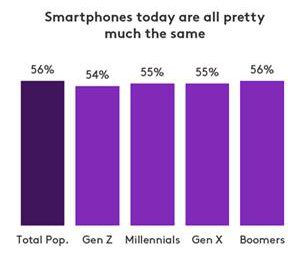