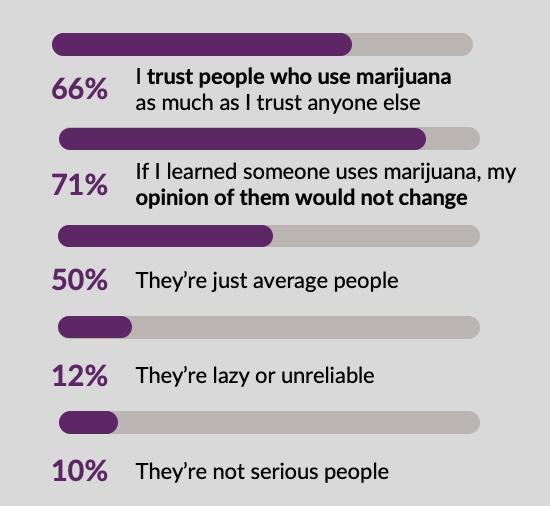 The latest National Cannabis Study from MRI-Simmons shows that consumption of CBD and marijuana obtained through legal or illicit channels has increased 63% since 2018—with 66 million U.S. adults reporting being users.

According to the study—derived from a nationally representative sample of 5,022 respondents—among cannabis consumers, 39% used only marijuana in the last 12 months, compared to 35% who consumed both marijuana and CBD, and 26% only CBD.

From a demographic standpoint, CBD users have a lot in common with those who indulge in marijuana, with the latter being slightly younger.

CBD consumers split 53% female to 47% male, while marijuana consumers divide evenly at 50/50. Median age for CBD is 41, compared to 37 for marijuana and roughly one-third of both groups are parents.

Two-thirds of respondents (67%) believe marijuana will be legal in all states within five years.

“What that says to me is that after years of cannabis having a bad rap, people are now embracing it and they’re overwhelmingly supporting legalizing it,” MRI-Simmons vice president of consumer insights Jillian Andersen tells Marketing Daily.

Reasons for legalization include “a good way to add tax revenue” (73%) and “cuts down on illegal drug traffic” (70%).

Asked about conventional stereotypes of marijuana users, 71% of respondents indicated that if they learned someone uses it “my opinion of them would not change” and 66% said “I trust people who use marijuana as much as I trust anyone else.”

Grouping CBD and marijuana together, 95% agreed that “cannabis is a healthier option than alcohol”, while 77% use cannabis as “part of my healthy lifestyle” and 74% have “cut back on prescription and/or OTC medication in favor of cannabis.”