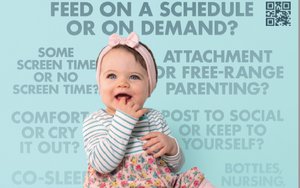 Church & Dwight’s Arm & Hammer has launched a baby laundry detergent via a campaign from the Via creative agency.

Running through at least the end of the year, the campaign includes three :15 spots airing on YouTube, Roku and Hulu. Wavemaker is the media agency.

One spot features a couple, one just a father, and one just  a mother pondering key parental decisions: “Schedule or go with the flow?,” “Cry it out or pick them up?” and ”Co-sleep or crib?”

The closing lines, though, remain the same in each: “Make One Decision Easy. New Arm & Hammer Baby Detergent. Tough on Baby Stains. Gentle on Skin.”

“Our detergent makes one decision easier on parents that they can feel good about,” reiterated Arm & Hammer’s director of marketing Laurie Kirschner. “They know the importance of choosing a detergent that cleans their baby’s fabrics effectively yet remains gentle on the skin.”

The new product, officially named Arm & Hammer Baby Hypoallergenic Liquid Laundry Detergent, is being sold at Walmart, online and “select” grocery retailers in two sizes, with prices from $4.99 to $8.99.

While baby detergents have been around for a while (one brand, Procter & Gamble’s Dreft, is more than 80 years old), other non-baby-specific detergents can also effectively help avoid giving infants rashes, eczema and the like. A recent top 13 list in Scary Mommy, for instance, doesn’t include Dreft (and came out before the Arm & Hammer product launched), but does name such general purpose detergents as Ecos, BioKleen, Mrs. Meyers and Method, alongside such brands as Noodle & Boo, Babyganics and Healthybaby.