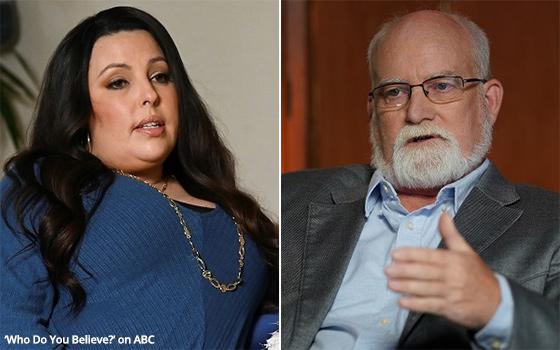 A new series coming to ABC on Tuesday seems to have perfected the art of keeping its audience tuned in during commercial breaks.

Whether they stay in the room to actually watch the commercials is something to be researched by someone else (such as the network, for example).

But this show, titled “Who Do You Believe?”, has a knack for springing surprises that get teased just before the commercial breaks in such a way that I defy anyone to change the channel and risk missing the payoff.

For one thing, a viewer learns early in the show that the surprises a narrator promises just before the breaks are well worth sticking around for.

At the very least, this was the impression I formed about Episode One, premiering Tuesday, while previewing the show on Monday.

The gist of the show is this: Two parties -- such as the man and woman from the first episode pictured above -- each have a story to tell about the same thing, in their case, their relationship and marriage.

The show positions itself as a “they report, you decide” kind of scenario. During the show, the participants are seen in separate settings alternately giving their sides of a story.

They do this in short doses -- a device that builds suspense and more importantly, sets the stage for the surprises that are teased throughout the show.

I have no idea whether future stories will be anything like the mind-boggling tale these two tell in Episode One. By way of describing it without giving anything away, here is an expression I have never used before in any of these blogs: OMG!

One very minor criticism of the show is that its title, at least to me, hinted at an interactive feature that may have been forthcoming at the end of the show in which viewers would somehow vote for the party they believed most.

The fact that this did not happen, however, presents no obstacle to staying riveted to this show.

As it happens, after hearing both stories in the premiere episode, deciding who was in the wrong here was not difficult for me at all. In fact, I felt it was pretty obvious. Again, though, this does not undermine this show’s effectiveness at all.

Basically, if this episode proves anything, it is that people do the darndest things. OMG!

“Who Do You Believe?” premieres Tuesday night at 10 Eastern on ABC.