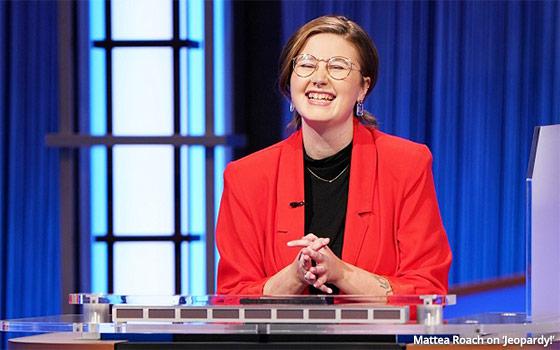 The 23-game winning streak of a 23-year-old tutor from Toronto came to a dramatic end last Friday on “Jeopardy!”

Her name is Mattea Roach (pictured above) and the degree to which she dominated her opponents (numbering 46, according to a TV Blog calculation) was exceedingly impressive and represented a very wide range of knowledge for someone at the tender age of 23.

The question that tripped her up in the “Final Jeopardy” round of her final game was a rare exception.

It was a question that seemed to a viewer at home that it was the kind of question that none of the three contestants would be able to answer.

However, one contestant just happened to live in the region that the question -- or “clue” in “Jeopardy!” parlance -- pertained to.

The “Final Jeopardy” category was very general -- USA. The clue was: “These two mayors gave their names to a facility built on the site of an old racetrack owned by Coca-Cola magnate Asa Candler.”

The answer, in the form of a question, was: “Who are William Hartsfield & Maynard Jackson?” The answer referred to Hartsfield-Jackson Atlanta International Airport, established in 1925 as Candler Field.

Thus, this question was so region-specific that it would take a resident of that area to come up with this answer. And that’s what happened.

The winner who toppled Mattea Roach was Danielle Maurer, 31, a digital marketing manager from Peachtree Corners, Georgia, a suburb of Atlanta.

After she won, host Ken Jennings took pains to assure the “Jeopardy!” audience that the show’s clues are written long before the show knows anything about upcoming contestants, lest viewers form the impression that this Atlanta question was designed for his Atlanta-area resident.

To add to the drama, Maurer won by $1, which sometimes happens in “Final Jeopardy,” depending on the way the players calculate their final wagers.

She answered jokingly: “Who are Churchill and Downs?” She good-naturedly added “idk” (“I don’t know”). Mattea -- seen in the photo above just after her loss -- took it graciously, even cheerfully, possibly because she had already compiled cash winnings totaling $560,983.

In addition, she became the fifth all-time consecutive-game winner and fifth on the list of all-time highest regular-season winnings. She will be back for future tournaments.

And so, “Jeopardy!” puts on another great series of shows and remains the top-rated show in all of national syndication -- a 5.6 national rating for the week ending April 24, according to TVNewsCheck.

The only other shows that come close are “Wheel of Fortune” (5.1) and “Judge Judy” (4.6, even though Judy Sheindlin exited the show in 2019 and all of the shows currently airing are repeats).