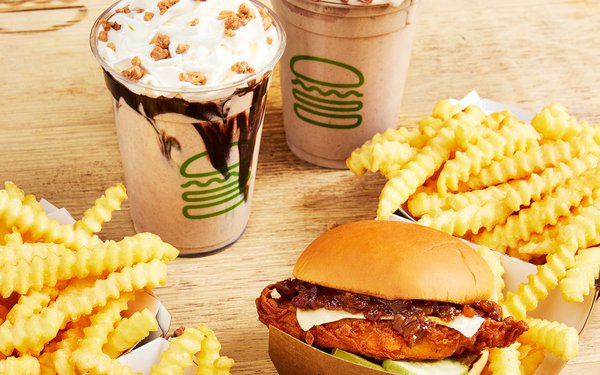 With sales gaining momentum, new menu innovations and expansion plans, Shake Shack has plenty of optimism about what lies ahead. But some observers think inflationary pressures may cut into consumers’ discretionary spending, dimming the chain’s short-term prospects.

The company, which has a decidedly more urban clientele than many of its QSR competitors, just introduced a new Bourbon Bacon Cheddar Burger and Bourbon Bacon Cheddar Chicken Sandwich, using a bourbon bacon jam made with Maker’s Mark. It says the limited-time collaboration is based on a sauce made with the Kentucky bourbon, describing it as sweet and savory, adding “woodsy and smoky flavors with a bit of heat.”

Shake Shack also says it is adding more drive-throughs, as well as kiosks.

For the first quarter, the company says sales rose 31% to $203.4 million. It posted a net loss of $11.3 million, compared to net income of $1.3 million in the comparable period last year.

In its earnings call, the company expressed optimism about its sales prospects, citing normalizing customer activity and mobility in its urban locations and signs that the labor market is stabilizing.

It also pointed to digital progress, with the average digital guest check coming in 25% higher than non-digital orders. The number of people placing a digital order for the first time jumped 60%, while it says it has retained 80% of the digital business amassed during the pandemic, even as in-store sales increase

Its most significant news, though, is expansion. The New York-based company has opened nine domestic company-owned stores so far this year. And it plans to open between 40 and 45 this year, the most in its history.

Many are slated for areas where the company already has a presence, focusing on “supporting our digital guest across our omnichannel experience,” Shake Shack says in its announcement. “We will also offer more convenient formats, like drive-up and walk-up windows as well as drive-thru.”

It expects at least ten new drive-throughs to be in action by the end of 2022.

It’s also adding more digitally enabled Shack Track pickup areas and investing in more kiosk installations. It said that kiosks are one of its most profitable channels, allowing for more flexibility in peak hours.

“We continue to have a positive view of Shake Shack’s long-term growth prospects,” writes David Tarantino, an analyst who follows the company for Baird. But he warns that if consumers start cutting back on spending, bourbon burgers might be off the table.

“We see some risks related to the discretionary spending backdrop, amid rising interest rates and general inflationary pressures, that potentially could impede the pace of the recovery.”