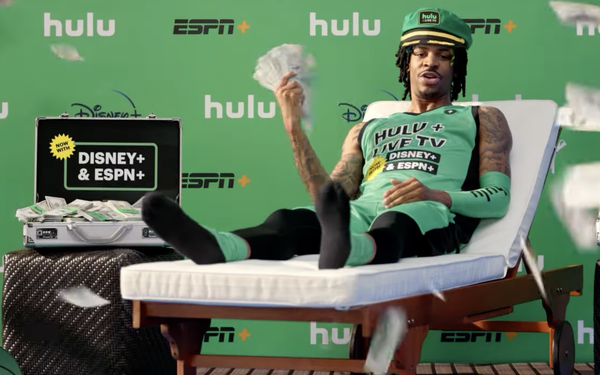 Memphis Grizzlies point guard Ja Morant stars in this spot for Hulu in which he models Hulu-branded activewear.

In the ad, via Big Family Table, Morant is sitting on a couch while being transported on a fashion runway. Meanwhile, onlookers are remarking on Hulu’s offerings, asking “Who knew that Hulu came with over 75 channels for sports, news and entertainment?”

At the end of the ad, another onlooker remarks that the event is “dumb” and asks “How much is Hulu paying him for this?” The final shot shows Morant waving some cash while noting that Hulu has live TV.

The ad is the latest in a series that started in 2019 and features sports stars like Tom Brady and Damian Lillard of the Portland Trailblazers. Hulu added 300,000 subscribers in the second quarter, though its live TV subscribers figure fell by 200,000.