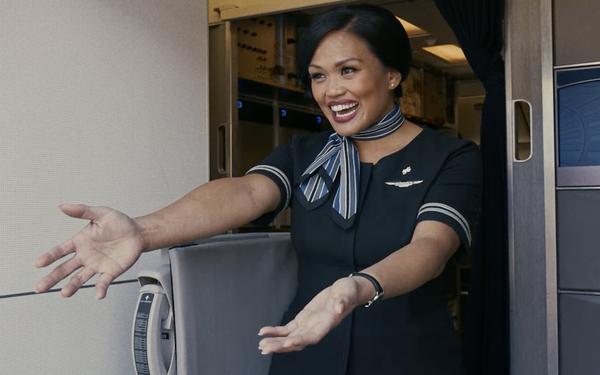 United Airlines broke its biggest branding campaign since 2013 with an anthem spot framed as the “story of an airline.”

The ad, via 72andSunny, starts out sort of like a pitch meeting with an announcer stating that it’s the story of an airline -- and then interrupting. “But wait! It’s about more than just planes.” From there, the narrative becomes a “sci-fi story…about a piece of trash that becomes sustainable aviation fuel” and “a rescue story about saving thousands of connecting flights.” In addition to being a romance, an adventure and a musical, the story is "a people story."

The narration is buttressed with shots of United employees and passengers smiling. The end of the ad summarizes that it’s the story of an airline when “Good Leads the Way,” which is United’s new tagline.

In a press release, United CEO Scott Kirby said United has “emerged as a force for good and an industry leader.” Kirby went on to say that United is making investments to fight climate change and is “training more women and people of color” to become pilots, along with getting rid of change fees.

As the ad notes, United has pledged to become carbon-neutral by 2050. That means relying on sustainable aviation fuel, derived from renewable or waste-derived sources.