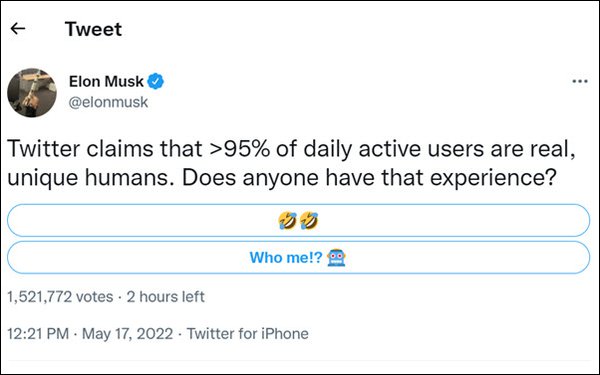 Twitter’s management is losing its patience as Elon Musk continues to waffle about his $44-billion agreement to acquire the social platform.

After Musk tweeted yesterday that the deal “cannot move forward” until he is given more information about the volume of fake accounts and spam on the platform, Twitter asked stockholders to back Musk’s original agreement terms.

Twitter’s board and Musk “agreed to a transaction at $54.20 per share,” and Twitter believes that agreement “is in the best interest of all shareholders," the company said in a statement. “We intend to close the transaction and enforce the merger agreement.”

As of Tuesday, Twitter’s stock price was well below Musk's offer price, at about $38 per share. It has been fluctuating up and down as Musk foments confusion with his tweets.

Despite the public back-and-forth, the parties issued a joint regulatory filing on Tuesday.

In Twitter’s proxy statement outlining facts about the deal for shareholders, it stated that Musk had opted overtly not to conduct due diligence, instead focusing during negotiations over the weekend of April 23 and 24 on pushing to win acceptance of what he called his “best and final offer.”

The deal documents include eight pages of “representations” about the status of the Twitter business, but none relating directly to bot counts, according to The New York Times.

On May 13, Musk tweeted that he was putting the deal “on hold” pending details supporting Twitter’s estimate that spam and fake accounts represent less than 5% of its users. But Twitter has long publicly stated that estimate.

On Monday, while speaking at the All-In Summit in Miami, Musk seemed to confirm speculation that he was trying to drive the acquisition price down by stating: "You can't pay the same price for something that is much worse than they claimed."

And asked if he would buy Twitter at a lower price, he said that "is not out of the question,” adding: “The more questions I ask, the more my concerns grow."

Also on Monday, Twitter CEO Parag Agrawal tweeted a long explanation of how Twitter calculates bots and noted that its estimates for the past four quarters were “well under 5 percent.”

Musk responded with a poop emoji and a tweet asking the S.E.C. to investigate the agreement.

Musk's agreement does not allow him to bow out of the deal based on a declining business environment, and obligates him to pay Twitter a $1 billion break-up fee if he fails to follow through on the deal, per that report. It also contains a "specific performance" clause that would allow a court to force him to complete the deal, although such clauses are rarely enforced.

Musk has implied that Twitter may have engaged in material misstatements that would void the deal, but experts say that argument would be unlikely to prevail.

However, as Twitter's management has acknowledged, an ongoing public dispute could hurt Twitter’s stock price.

Before a deal could close, it would have to be approved by regulators, as well as stockholders.

Under such scrutiny, Musk’s public statements that he does not believe in business plans, and his vague-at-best statements about what he will do as Twitter’s owner, could weigh against him.