Stella Billboard Aims To Fight PTSD As Fire Breaks Out Nearby 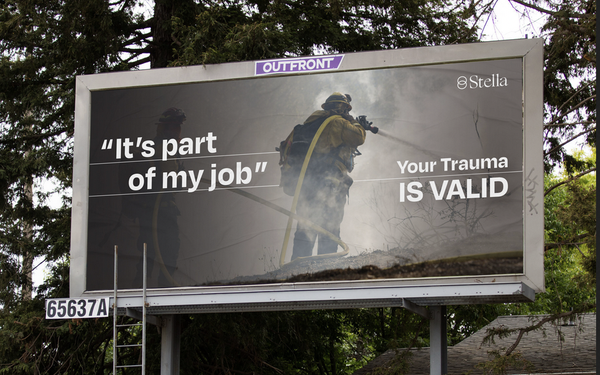 On Monday, PTSD trauma center Stella launched a billboard on Route 495 at the mouth of the Lincoln Tunnel heading into Manhattan showing a medical worker, the headline, “It’s Part of My Job,” and the tagline, “Your Trauma Is Valid.”

Just before rush hour on Wednesday afternoon, Stella’s message hit home when a car nearby caught on fire, closing all lanes on the tunnel.

The billboard is part of the first-ever marketing campaign from Stella, a two-year-old medical provider that now has more than 50 PTSD treatment centers across the U.S.

Stella fights PTSD with such medical tools as its own Stellate Ganglion Block procedure and Ketamine Infusion Therapy.

The campaign includes three other strategically placed billboards that are designed to destigmatize PTSD and the life-altering symptoms of emotional traumas. While all the boards use the tagline, “Your trauma is valid,” each is unique to its setting.

For example, since Texas is the state with the most victims of child abuse, a board in Dallas features a photo of a child and the headline, "It was a long time ago."

At the Dallas-Fort Worth airport, which has lots of military traffic, Stella’s billboard taps into Secondary PTSD. The photo shows a family hugging and the headline reads, "I wasn't the one who went to war."

In Sacramento, California nearby where 2021’s largest wildfire wreaked havoc, the photo is of a firefighter, with the same headline, “It’s Part of My Job,” as seen on the New York board.

The reasoning behind that board, located technically in Weekhawken, NJ, was to address continuing first-responder trauma and burnout in the area hardest hit by the COVID-19 pandemic.

While the OOH campaign is “focused on specific traumas, based on the locations of each billboard, and the mindset of those who experience them," theoverall campaign “is nonetheless targeted to society at large," Matthew Erley, Stella’s chief growth officer, tells Marketing Daily. That campaign includes digital ads addressing such other traumas as fertility issues, job loss and divorce.

“'Your Trauma is Valid' is meant for everyone who invalidates themselves and their traumas and can be applied to any trauma type that can trigger symptoms of PTSD,” Erley explained.

"This campaign was personal," acknowledged Kristin "KB" Busk, former director of social innovation at The Many who now heads content for Stella, in a press release announcing the campaign. "It took me working in the mental health space to realize my 'truths' and actions aren't personality quirks, they're behavioral responses to untreated trauma."

The four billboards, created in-house by Busk’s team and placed by Outdoor Media, are scheduled to remain up until the end of Mental Health Awareness Month on May 31. Digital ads are running on Facebook and Instagram.

June, meanwhile, brings PTSD Awareness Month, when the digital campaign will extend to TikTok and other platforms.