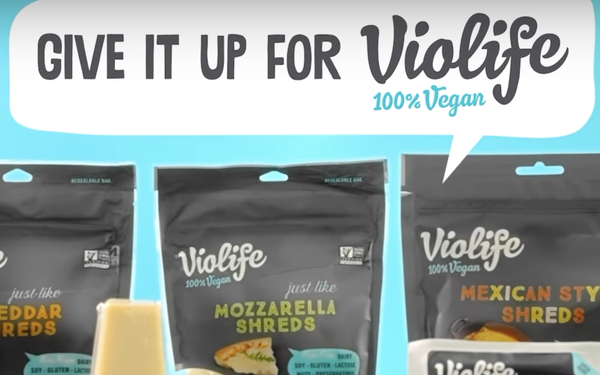 While Violife’s primary consumer targets historically have been vegans and people who are dairy-intolerant, the plant-based cheese pioneer wants to broaden its brand awareness to all “curious cheese lovers.”

That’s the aim of a national campaign titled “Give It Up For Violife” that places particular emphasis on New York City to promote dairy cheese alternatives in everything from macaroni & cheese to nachos to pizza.

Focusing on taste and texture, creative from the Truth and Consequences agency highlights some of life’s cheesier moments—like when a rude person swipes the “nucleus” from a full bowl of vegan nachos.

“We chose New York City due to its diverse foodie culture” where there’s “always an option for everyone, regardless of background or dietary need,” Violife senior brand manager Debra Yoo tells Marketing Daily.

She cites “taste, texture and appearance” as doubts that some consumers have with regard to plant-based foods.

On May 21 and June 11, Violife will be sponsoring pizza workshops at the Time Out New York food venue in Brooklyn, where chef Ivy Stark will host vegan pizza-making workshops.

Rounding out the sampling activities is a Violife food truck circulating through greater New York City.

Violife’s roots are in 1990s Greece, where it was positioned as a dairy-free alternative cheese alternative that could be consumed during 100 days of Greek Orthodox fasting, when animal-protein consumption was prohibited.

The company began to achieve U.S. retail distribution in 2015 and its parent company, Arivia S.A., was acquired by Upfield Europe B.V. in January of 2020.