Wholesome Teen Lit Morphs Into Something Quite Different On CW 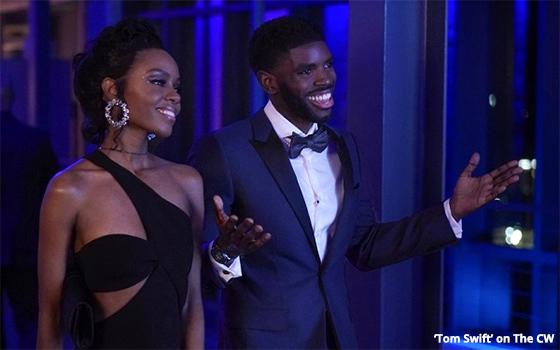 No reason whatsoever exists for the new CW series “Tom Swift” coming next week to be named for the inventive hero of a 100-year-old book series for boys.

The new title character parts company with the original Tom Swift in every way. The new Tom is a young adult and not a teen-ager.

The new one is gay, and also promiscuous. No evidence seems to suggest that the original Tom was similarly oriented.

The new Tom is the scion of a super-rich family with issues and conflicts in the tradition of “Dallas” and “Dynasty.”

By all appearances, the original books were about something much simpler -- basically, the adventures of a boy inventor, and that is pretty much it.

Let the record show that the new Tom Swift is also an inventor, but with millions of dollars of financial support from Dad. This sets him miles apart from the original.

The fact that the new Tom Swift (played by Tian Richards, above photo right) is African-American and the original was white does not count.

The new one’s race is of course irrelevant. A “Tom Swift” TV show set in the present day but based more on the original content and intent of the books could have been made just as easily with a black teen as a white one.

Having said that, the reasons why someone named this new series “Tom Swift” remains a mystery. Is the “Tom Swift” brand even that well-known today?

The complete makeover of “Tom Swift” is part of the CW way with time-honored IP that was once aimed at young teen-agers and tended more to the light side than the dark.

This is what happened when The CW set its sights on Archie comics and Nancy Drew.

The wholesome world of Archie and his friends -- schoolmates Betty, Veronica, Reggie and Jughead -- morphed into “Riverdale,” named after the gang’s hometown but bearing no resemblance to it.

In "Riverdale," which premiered in 2017, secrets seethe beneath the town’s streets and well-kept lawns. At the outset of the series, Archie himself had a steamy summer affair with one of his teachers, Miss Grundy.

Remember her? In the old comics, she was an elderly spinster with her white hair in a bun. Today, she’s Mrs. Robinson. Oh, how the times they have a-changed!

The headline on a TV Blog review in January 2017 was “Sad Archie And His Angst-Ridden Friends Populate New ‘Riverdale’.”

“Instead of a wholesome show somewhat akin to the tone of the comic books, you get a ‘Riverdale’ that’s more like ‘Twin Peaks’,” the column said.

Premiering in 2019, CW’s “Nancy Drew” was also more dispiriting than spirit-lifting. “The title character is a woman in her early 20s who affects the world-weariness that is so common in CW series about, and aimed at, young adults. She is a Debbie Downer,” said the TV Blog.

As for the new “Tom Swift,” it is so far removed from its source material that it will hold no appeal for the kinds of kids and teens that made the original Tom Swift so widely known.