In A First, Arby's Offers A Burger 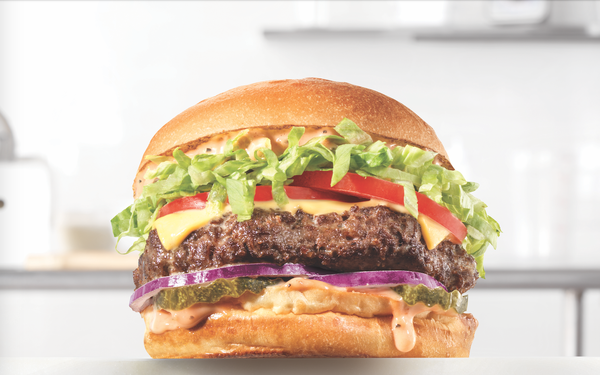 Arby's, known for roast beef and chicken sandwiches,  is finally putting a burger on its menu.

The chain is adding a limited-edition Wagyu Steakhouse Burgers, which it says is the highest-quality burger the fast-food world has ever sunk its teeth into.

Waygu cattle originated in Japan. Arby's version blends 52% American Wagyu and 48% ground beef in a 6.4-ounce burger, which it proudly points out is 50% bigger than the Quarter Pounder served up by McDonald's.

A spokesperson says the new item will be supported by a full advertising campaign starting next week, created by Fallon.

The launch comes as consumers continue to cut back on meat -- a trend driven by health concerns and the growing popularity of plant-based meat options.

The U.S. Department of Agriculture predicts a slight decrease in red meat and poultry consumption this year. A recent CBS poll found that 36% of Americans report eating less meat than they were a few years ago.

But 57% say their meat consumption hasn't changed much, and 6% say they're eating more.

Arby's thinks it can win them over by introducing a premium burger.

"Boring burgers are a fast-food staple, so Arby's felt compelled to raise the bar," says Patrick Schwing, Arby's chief marketing officer, in its announcement. "Instead of focusing on making billions of mediocre burgers, we're taking a stance on high-quality meat that deserves to be cooked properly."

Arby's is cooking the burgers up "sous vide" style. (That means "under vacuum," for those of us not up to date on French cooking terms.) The method relies on precise temperature controls, cranking out a sandwich Arby's says is juicy, tender and with a slightly pink center.

Arby's, owned by Inspire Brands, says it's been working on creating a premium burger for more than two years.

Priced starting at $5.99, the burger is served on a toasted brioche bun, with bacon and ranch add-ons.

QSR Magazine currently ranks Arby's as the 16th largest chain in the U.S., with annual systemwide sales climbing from $3.89 billion to $4.22 billion.