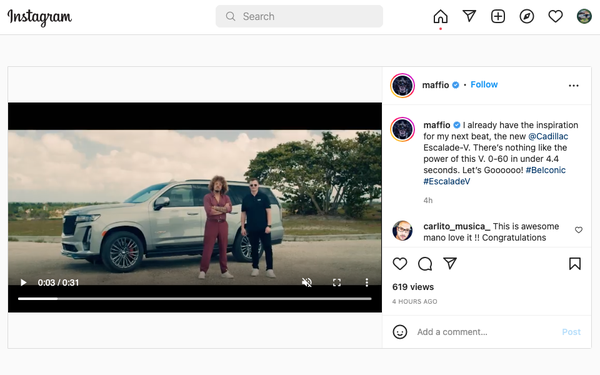 Cadillac has reunited with Latin music producer Maffio in a collaboration to celebrate the arrival of the 2023 Escalade-V.

Following the release of his new album on May 13, “Eso Es Mental,” this collaboration went live May 26, and includes exclusive video content featuring Maffio and his first  behind-the-wheel experience with Cadillac’s new Escalade-V.

Maffio posted the 30-second video on his Instagram page, where he has 346,000 followers. There are also 15-second and 6-second digital videos.

Cadillac looks to collaborate with artists and celebrities, including Maffio, who encompass Cadillac brand attributes like being bold and authentic trailblazers, says Melissa Grady Dias, global CMO at Cadillac.

“Cadillac’s long-standing historical tie to music and pop culture allows us to seamlessly incorporate the right talent into a multitude of campaigns,” Dias tells Marketing Daily. “Music has always been a key cultural pillar at the core of Cadillac and is naturally part of the emotional connection that our consumers share with us.”

Maffio has been a champion of the Cadillac Escalade since he was brought in to compose the score for the 2020 “Never Stop Arriving” campaign.