Delta-8 THC: At The Nexus Of Legality, Lawsuits 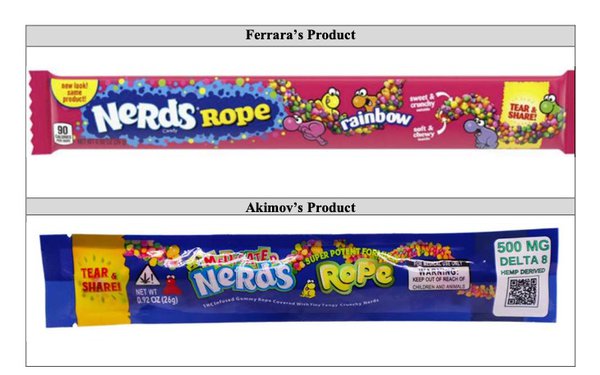 If you want to market hemp, marijuana or their myriad derivatives, consider getting a law degree.

That’s the prima facie evidence from two lawsuits involving Delta-8 THC and Nerds candy -- and a potential third case in which multistate marijuana operators are teaming up to sue the federal government.

As reported last year, in 2018 Congress passed the Agricultural Improvement Act, legalizing the growing and distribution of hemp in most states. But to be federally legal, hemp cannot contain more than 0.3% of Delta-9 THC.

What slipped under the Congressional radar was Delta-8 THC, which can be synthesized from hemp-derived CBD while providing a much stronger mental and physical effect than CBD.

While individual states are scrambling to declare whether Delta-8 THC is legal within their borders, the federal court system has just weighed in on the subject.

It came in a ruling by the U.S. Court of Appeals for the Ninth Circuit in a copyright and trademark-infringement case brought by e-cigarette and vaping products manufacturer AK Futures LLC against Boyd Street Distro LLC.

Boyd Street’s defense was that AK Futures could not own a valid trademark for Cake products because Boyd Street contended that the federal government considers Delta-8 THC to be illegal.

In upholding a lower court’s finding in favor of AK Futures, the appeals court said the “plain and unambiguous text” of the Farm Act legislation “compels the conclusion that the Delta-8 THC products before us are lawful.”

It was the latest legal skirmish between Ferrara—which markets Nerd Ropes—and other CPG marketers and companies selling THC-infused edibles with alleged poached-trademark branding.

As of today, Nerds Ropes were listed on the Top Five website along with the notation “No products were found matching your selection.”

A listing titled Rice Crispy Treats also was accompanied by the notation “No products were found matching your selection.”

CPG FYI reached out to Top Five for comment but had not heard back by deadline.

Meanwhile, Ascend Wellness Holdings and several other multistate marijuana operators are banding together to sue the federal government over a variety of issues—foremost among them a challenge to the U.S. Controlled Substances Act.

One example of an area where more clarity is needed is drug paraphernalia enforcement in the wake of the 2018 Farm Act, according to Fred Rocafort, an attorney with the Harris Bricken law firm.