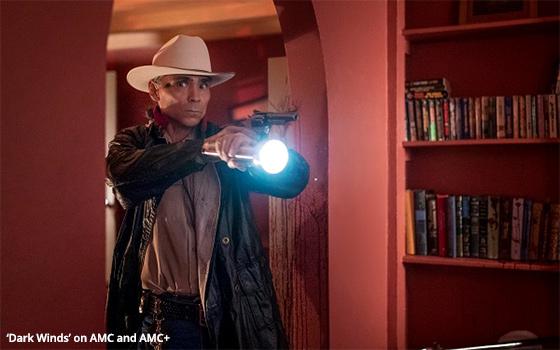 The American southwest circa 1971 is the setting for a great new western detective series coming this weekend to AMC and AMC+.

It has the quasi-mystical title of “Dark Winds,” which refers specifically to a series of violent crimes that have blown into a remote corner of the sprawling Navajo Nation in Monument Valley, which straddles Arizona and Utah.

But “Dark Winds” also reflects the superstitions of the region’s natives with which they react to bad news, particularly in this case the arrival of evil in their midst.

The white people in the area do not understand their Indian natives and the same goes for the natives’ comprehension of the ways and motivations of whites.

However, “Dark Winds” is not a racial allegory. It is instead a straight-ahead detective story -- a hard-boiled western crime story in which the relentless sun, heat, dirt roads and remote homesteads play as much a role in this show’s story as the show’s human characters.

First and foremost of these is a police lieutenant named Joe Leaphorn (played by Zarn McClarnon, pictured above) who heads up the area’s tiny outpost of the Navajo police.

He is a Native American who is challenged to navigate the thicket of cultural misunderstandings that characterize the relationship between natives and whites.

Not that there are very many of the latter. In the premiere episode of “Dark Winds,” whites are represented chiefly by two FBI agents who show up to investigate the recent murders since homicides committed on reservation land fall under federal jurisdiction, not local.

The problem is, the FBI agents do not particularly care about reservation crime, so Lt. Leaphorn and his two uniformed underlings undertake an investigation of their own.

One of the FBI agents is played by Noah Emmerich, who seems to be making a career out of playing G-men. He was last seen in “The Americans” playing an FBI agent who was a neighbor of the show’s embedded Soviet spies.

“Dark Winds” and its main characters -- Lt. Leaphorn and Jim Chee, a new deputy who has just been assigned to Leaphorn’s tiny force -- are taken from a series of 18 “Leaphorn & Chee” novels written by the late Tony Hillerman and published from 1970 to 2006.

The chief similarity is that their rugged, rural locales are a welcome change from TV’s reliance on the same urban settings -- New York, Chicago, Los Angeles -- over and over again for its crime dramas.

In “Dark Winds,” urban streets and back alleys are replaced by deserts and crude shacks in the shadows of the majestic mesas of Monument Valley.

Famed for its beauty, the valley is a national treasure that turns out to be a great place to set a crime drama.

“Dark Winds” premieres on AMC and starts streaming on AMC+ on Sunday (June 12).