Bourne Again: Jeff Bridges Is An Active Senior In 'The Old Man' 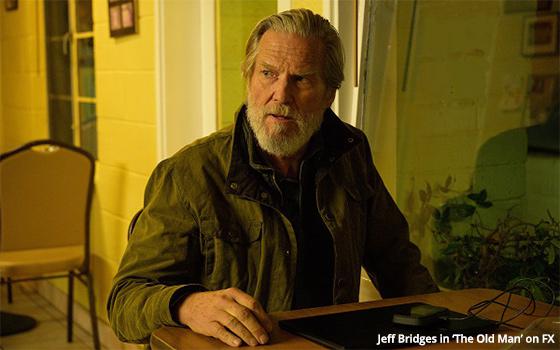 Those who have seen the many promo spots that have been airing recently for the new Jeff Bridges drama premiering this week on FX and Hulu can be forgiven for not quite understanding what the show is all about.

That’s OK because such spots are meant to tease without revealing much. The TV Blog hereby attempts to put more meat on the bones, so to speak, by describing this series, titled “The Old Man,” as “Jason Bourne in a 72-year-old’s body.”

That probably sounds far-fetched at first, but the genius of the show was in the casting of Bridges (pictured above), who has somehow remained as lean as ever at age 72.

His physique helps make this scenario plausible. In short, the character he plays, a former CIA operative named Dan Chase, is one tough old bird.

In the show, former agent Chase has been living a rural life for 30 years with a fake identity he adopted while on the run a couple of decades previously.

As “The Old Man” begins, however, men show up to try to kill him and suddenly he is on the run again, but with a difference.

This time, he plans not to run, but to make a stand -- i.e., fight back. Watching him do this is a pure pleasure.

In the premiere episode, we learn that the reason behind Chase’s running then and now stems from the same thing -- something that happened decades ago.

Besides running from a coterie of skilled government agents, Chase is also challenged to match wits with a former ally/adversary, Harold Harper, played superbly by John Lithgow.

Jeff Bridges and John Lithgow? How can this show lose? Answer: It can’t.

“The Old Man” premieres on Thursday (June 13) on FX and Hulu.