Netflix Menu Gets Cooking With 'Iron Chef: Quest For An Iron Legend' 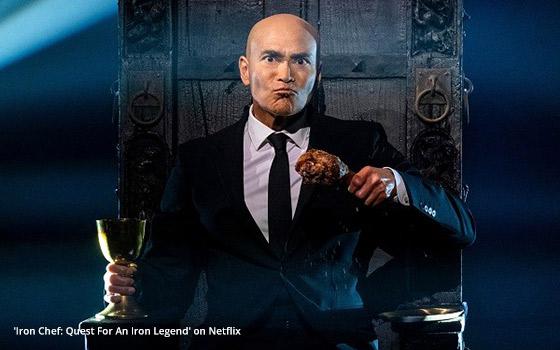 Netflix has cooked up a new incarnation of "Iron Chef," which begs the question: Who ordered this?

This new "Iron Chef" with the tasty title "Iron Chef: Quest For An Iron Legend" gets added to the Netflix menu on Wednesday.

But will it satisfy the appetites of "Iron Chef" fans who have followed the evolution of this over-the-top food-preparation franchise?

The answer is a probable yes. If the premiere episode previewed by the TV Blog is any indication, this new one has all of the noise, action and bravado that made the original "Iron Chef" the undisputed king of cooking competition shows -- and a show to which all other TV cooking contests owe a debt of gratitude.

The original "Iron Chef" burst onto the American pop culture scene like a rising sun after Food Network imported it from Japan in 1999.

The show then ran with no alterations except for one: All of its Japanese voices were dubbed in English.

The effect reminded some of the joys of Asian monster movies and kung fu epics (colorfully nicknamed "chopsocky" by Variety) from the 1950s and ’60s that were also dubbed. Before long, America was smitten.

Playing out in a huge, elaborate studio called Kitchen Stadium, the show was hosted by a fascinating figure -- one Takeshi Kaga, who was known on the show as “Chairman Kaga.”

Perhaps the single best-remembered moment of each show was when Chairman Kaga opened the competition by biting dramatically into a raw, crunchy bell pepper.

Takeshi Kaga was an actor. In the new Netflix "Iron Chef," an actor also takes on the role of "chairman" of the proceedings -- Mark Dacascos (pictured above).

He bites into no peppers in the first episode of "Quest For An Iron Legend," but instead substitutes an apple for the traditional pepper.

Like all of the other "Iron Chef" versions, the new one has a talented chef who is not yet a household name competing against an “iron chef” chef who is already famous mainly from appearing tirelessly on television.