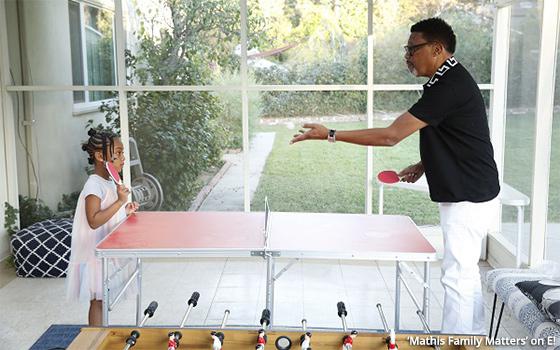 Steve Urkel makes no appearance on the premiere episode of a new “Family Matters” -- “Mathis Family Matters,” to be exact.

Chances are, Johnny Mathis won't show up either. This one is a celebrity reality show about the home life of another Mathis, TV judge Greg Mathis and his family.

Premiering Sunday on E!, it enters an arena where dozens and dozens of celebrities and their wives and kids have gone before. Some hung in there for a while, but most were short-lived.

Greg Mathis, of course, is the star of one of daytime TV's longest-running syndicated court shows. The show, “Judge Mathis,” started its 23rd season last September.

The court show has apparently made him fabulously wealthy. On “Mathis Family Matters,” the doors of his Bel Air mansion are thrown open for all to see.

Not surprisingly, it is a huge and beautiful home. When I first beheld the home's main floor interior while watching the premiere episode this week, I did a double-take or two at the sight of multiple walls that seemed to be clad floor to ceiling in exotic, expensive stone -- marble, granite or possibly even onyx.

For all I know, it may have been just wallpaper. Who knows? But it looked incredible.

Like so many other shows like it, Mathis and his family try mightily -- perhaps too mightily -- to turn on the charm. Whether they succeed in this is strictly in the eye of the beholder.

The show's plot, such as it is, centers on the return home of Mathis' two grown children, a reunion that makes for hugs, kisses and expressions of sheer delight -- a display of familial joy to which some viewers will relate, while others will not.

What follows are many scenes of family fun and love in various rooms -- the spacious kitchen, a den of some kind (possibly the judge's home office), and another room with an ample upholstered couch on which Judge Mathis and a family member, more often than not his wife Linda, sit and face the camera to tell gentle, self-deprecating stories about each other.

There are also sassy grandchildren, one of whom teaches granddad a thing or two about ping-pong in the photo above. Aww.

At one point, Mathis reveals that his love of family -- especially when they are all together -- stems from his hardscrabble childhood in a Detroit housing project, an upbringing that was not characterized by traditional family values.

The continuing storyline of the show will revolve around the judge's efforts to persuade his visiting offspring to remain in the L.A. area -- something they are already considering.

It is all very nice and pleasant. But is it entertainment? That is a matter of personal taste.