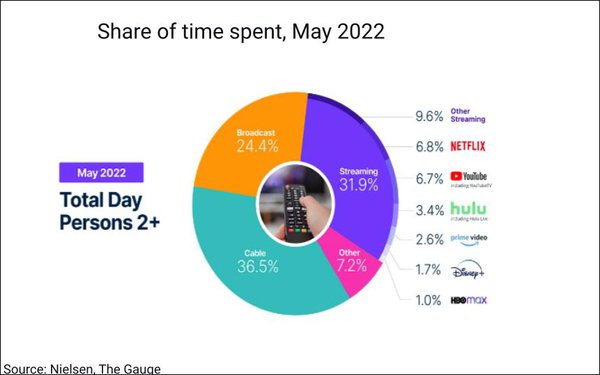 Streaming’s share hit its highest mark to date, at 31.9%, and also saw its largest month-to-month gain, 1.5 points, as tracked by Nielsen’s monthly viewing snapshot, The Gauge.

Time spent streaming in May increased 2% versus April, boosted in part by end-of-month releases of “Obi-Wan Kenobi” on Disney+ and “Stranger Things” on Netflix. (Disney+ captured 2.5% of total TV viewing on May 27, and Netflix claimed 9.0% on May 28.)

Streaming was the only viewing category to exhibit any month-over-month growth in May, continuing to close the gap on cable's 36.5% share of viewership, and exceeding broadcast's 24.4% share.

Looking at the longer-term trend, streaming’s share of total TV time last month was up by 5.7 points compared to May 2021’s 26.2% share. 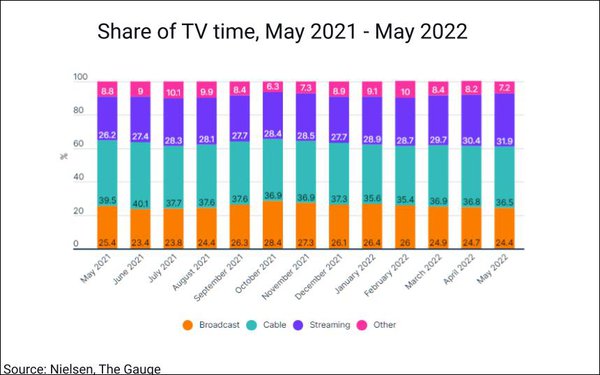 Looking at streaming services’ comparative share performance over the past year, “other” services have continued to grow, moving from an 8% share of total TV time in May 2021 to a 96% share last month.

And despite all of the coverage of its subscriber growth challenges, Netflix’s share of total TV time has been fairly consistent over the 12-month period. YouTube is up by 1 point versus May 2021, and both Hulu and Amazon Prime Video have edged up a bit over the past year. 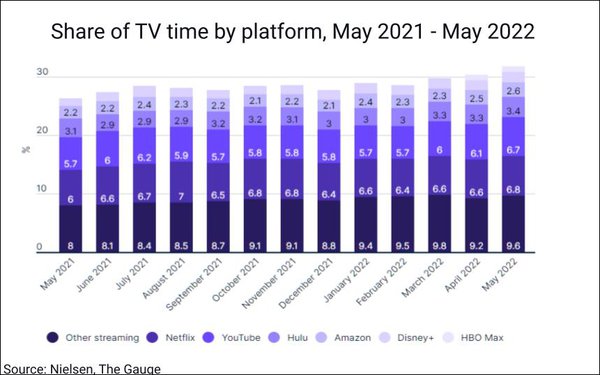 As for overall TV viewing levels, May is normally the month with the lowest viewing level, so the 2.7% consumption decline seen this May was in line with expectations.

Also in line with historical norms, broadcast and cable viewing both declined in May, each seeing a 3.5% decline in viewing volume.

Dramas continued to claim the largest share of broadcast viewership for the month. Procedural crime dramas, including “NCIS,” “FBI” and “Blue Bloods,” drove about a third of broadcast viewing.

Cable news viewing was down 4.2% versus April, but still claimed cable’s largest time share: 17%. Cable sports viewing was up 7%, and had a 9% cable share. NBA playoff games were the top six most-viewed cable programs in the month.