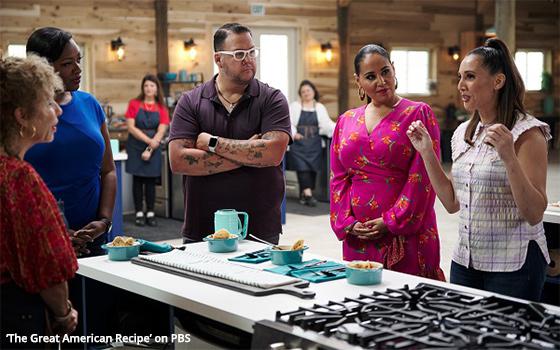 When a cooking competition show turns up on PBS, it is not unreasonable to wonder once again what the PBS brand stands for.

As anyone in possession of a TV knows, cooking competitions are a staple of Food Network and also part of the mix elsewhere, most notably on Fox with its Gordon Ramsay shows. Netflix has a few of them too.

PBS will introduce its own cook-off entry on Friday. The show, “The Great American Recipe,” will run for eight Fridays this summer.

The show features 10 home cooks -- ordinary folk from around the country -- competing in each episode to advance to the next round. Like all other such competitions, one will be sent home each week.

Not surprisingly, the home cooks are a diverse group each having experience with a variety of regional and international cuisines.

Bambi Daniels of Winston-Salem, North Carolina, grew up on South Carolina farms owned by family members. There, she developed a lifelong skill in the preparation of southern country favorites.

The rest have similar stories, backgrounds and specialties. In the show, they get together in a renovated barn set in a pastoral setting in Ruther Glen, Virginia.

The barn is outfitted with chef’s workstations, where the cooks work under timed deadlines to prepare their dishes for the show’s panel of three judges.

In the premiere episode, we meet the contestants and then go along with them as they race to finish their dishes before time is called.

In its format and even in its title, the show might have been influenced by the great success of “The Great British Baking Show,” a show imported from England for PBS stations that may have been the finest food-competition show ever made.

Both shows are set in bucolic countrysides. And the formats of each show’s competitive rounds are basically the same.

Differences between the two shows are also fairly obvious. One is about baking and the other is not. One is British and one is American.

Only one, “The Great British Baking Show,” had the extraordinary British baker Mary Berry as mentor and co-host. She was that show’s main attraction.

Even if “The Great British Baking Show” was the model for “The Great American Recipe,” it is also true that PBS has been known for decades for its food shows, although they have traditionally been instructional and not competitive.

Many who will come across “The Great American Recipe” might be forgiven for believing they have stumbled on any number of other channels that are better-known for their food competitions than PBS.

In a world where viewers with remote controls in their hands make split-second decisions whether to stay or leave the channels they graze through, how a channel looks can be important.

Often, I know exactly what channel I’m on by the look and sound of the content. For the most part, PBS content has that same distinctive look and feel to it also.

But that is all quibbling, which is a practice common to all TV critics. So is nitpicking. We are all great at both of them.

So, to quit quibbling and give “The Great American Recipe” its due, it is a very fine show -- upbeat, optimistic and a pleasure to look at. The food looks good too.