'America Outdoors' Celebrates Americans And The Lands They Call Home 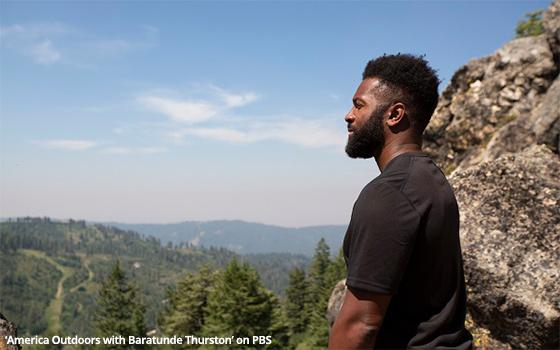 In this current period characterized by rage and division, celebrating the birth of the United States on July Fourth may prove challenging to some.

What they may need is an opportunity to bear witness to another side of America that does not involve unbridled anger.

One such opportunity to trade that anger for appreciation comes in the form of a new series premiering on PBS the day after July Fourth (Tuesday, July 5).

The show, titled “America Outdoors With Baratunde Thurston,” is a love letter to America, warts and all, but much less of the former than the latter.

In the show, Baratunde Thurston (pictured above) takes a tour of diverse regions of the United States, where he meets Americans who have formed relationships with the geography that surrounds them.

The show consists of six one-hour episodes. The first one on July 5 takes Thurston to Death Valley, where he meets a man who moved to a remote ghost town there during the pandemic and has decided to live there permanently, alone.

He also meets another rugged individualist, an ex-Marine who participates in marathons held every July in Death Valley.

Officially, these races are standard length for marathons -- 26.2 miles. But the object of these endurance contests is to run as far as one’s body can go in heat that is literally blistering.

In subsequent episodes, Thurston takes us along as he visits Idaho, the greater Los Angeles area, Appalachia, the North Carolina coast and the Arrowhead Region of Minnesota.

Baratunde Thurston, 44, has had a varied career -- producer for “The Daily Show,” advisor in the Obama White House, author (“How To Be Black”) and producer, creator and host of his own podcast, “How To Citizen With Baratunde Thurston.”

He also identifies as a comedian and in “America Outdoors,” he displays a quick, congenial wit that adds to the pleasure of traveling with him. It is also a device he uses to make his interview subjects comfortable and open up to him.

The show is remarkably well made, the filmmaking top-notch. In this show, the locations and the people Thurston meets in them are both equal stars.

The people and their stories are compelling and the pictures of the lands in which they live are as beautiful as any that have ever aired on television.

The overall impression is that far from the madding crowds and contentious media that characterize what might be described as the “visible” America, many, if not most, Americans live far away from that chaos -- both physically and mentally.

There, surrounded by the lands in which they have decided to stake their claims and live their lives, they coexist with their surroundings. For them, America is a place of open spaces and above all, peace.