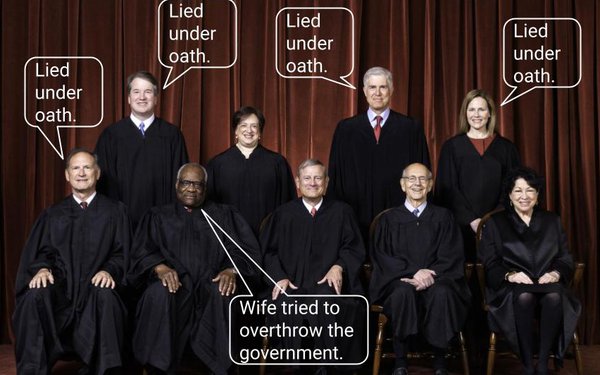 "Do we live in a theocracy," New York public radio's Leonard Lopate asked during his call-in show Monday morning. I had to think for a minute -- okay, it was just a few seconds -- but my immediate answer was, "yes." For now.

That's because American has never been a pure democracy. We're a Constitutional Republic that is a form of democracy in which we get to vote for elected officials --  legislative ones in the House and Senate, and an executive one in the Oval Office, who pick judicial ones in the Supreme Court -- to represent us in order to protect our Constitutional rights.

The problem is our founding fathers designed an imperfect system in which a minority could rule, and right now that minority is controlled by Theocrats who are stripping Americans of some of our most fundamental rights.

Last week's Supreme Court decision to overturn Roe V. Wade -- even though four of the justices lied under oath that it was precedent and settled law -- is just the most visible, in-your-face -- or as the case may be, in-your-womb -- example.

This week's SCOTUS decision to uphold the right of a college high school coach to pray on the 50-yard line after his team's games, is another example that America's minority theocratic rule is removing the line separating church and state. My only question is what would have happened if he was a Muslim coach who rolled out a prayer matt and bowed to Mecca? How would that ruling have gone?

But aside from the fact that we now know four justices perjured themselves by lying under oath -- and clutch my pearls, to Maine Senator Susan Collins -- the real problem in America's current theocracy is that we are being ruled by a minority and that definitely is not in the spirit of the what our founding fathers (or mothers) intended.

Sure they left loopholes -- the Electoral College, the even representation of states in the Senate -- that enabled the Theocratic Party to game the system and seize control of our government. But they also created a Constitution that was intended to be a living document that could be amended and evolve over time.

And if we want America to be an actual democracy -- not one in which a third of voters can tell two-thirds what their rights are -- we need to focus on that.

Look, I get it. I understand and actually respect the pro life movement's beliefs. And I genuinely believe they have a right to express that and to live it, to lobby it, and to do anything in their power to enable it, so long as it doesn't encroach on the rights of the majority of Americans. Yet that's what they've done.

So the truth is America is now a three-party system -- Democrats, old school Republicans, and Theocrats -- which is okay with me, so long as we all get one vote.

And that's what the media should be focusing on as they cover this.

2 comments about "How Theocrats Became The Grand New Party".
Check to receive email when comments are posted.
Read more comments >
Next story loading