Cosplayers, Plant Fans Find Their People (Or Not) In Reddit Ad 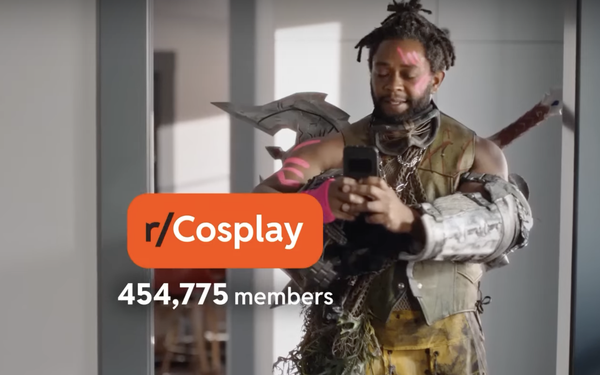 Reddit is breaking its first-ever TV campaign with an invitation to “Find Your People.”

The ad, via R/GA, celebrates the quirks in our thinking and behavior that make us unique. For instance, the ad starts with a man in the shower, who is talking to his significant other. “Did you ever notice how hair and nails aren’t gross until they’re off your body?” the man asks. The woman walks out without a word.

The next vignette is a woman caring for a plant. “I think there’s something wrong with Phil,” she says sadly. The friend tells her to just get a new one and the woman then says to the plant, “She doesn’t deserve you.”

Finally, a man is dressed in cosplay and his wife doesn’t understand. She perceives it as “roleplay,” and he gets on his phone and says to himself, “My people get me.”

Reddit has been around since 2005 and is currently the sixth most-visited site in the U.S., according to Semrush, but for many people it’s a niche site where people go to follow their obsessions. This ad makes the case that we’re all obsessives about one thing or another.