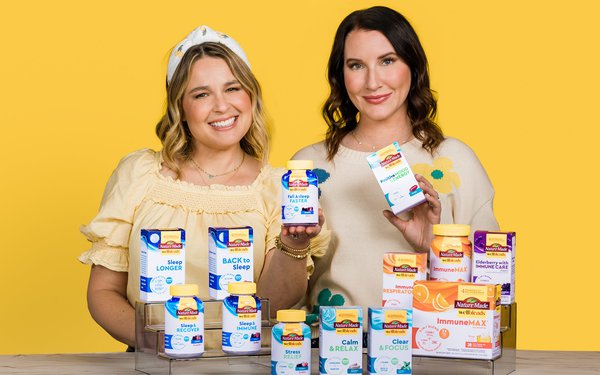 Clea Shearer and Joanna Teplin, home organizing experts with their own Netflix series (“Get Organized with the Home Edit”), star in a campaign for Wellblends, a new supplement line aimed at stress reduction and better immunity and sleep from Pharmavite’s Nature Made.

“Clea and Joanna are shining examples of the consumers we are serving with Nature Made Wellblends,” Pharmavite chief marketing officer Rhonda Hoffman told Marketing Daily. “They know very well what it is like to try and do it all --  whether it is being a mother, organizing a home, or taking care of their wellness systems--- but sometimes even they need some help.”

That help comes in the form of Wellblends, which launched in April, and includes sleep, immunity and stress formulas available in capsules, gummies, powders or pill form.

“As Joanna and Clea share so well, the best organized system is one you can actually stick to and use," Hoffman said.

“We found a brand that loves a system almost as much as us,” Shearer says in one video. “They’ve figured out that our sleep, health and immune health are a connected system,” adds Teplin.

The team co-founded The Home Edit organizing business in 2015 and have now co-hosted two seasons (16 episodes) of their Netflix series.

In YouTube videos and posts on the social media channels of both Nature Made and The Home Edit, Shearer and Teplin discuss ways to organize for better health, such as organizing "work-from-home and office areas for better focus and productivity” and optimizing the bedroom "for improved sleep.”

“Overall, our goal is to keep Nature Made Wellblends top-of-mind for consumers as life happens, meeting them as a ready resource wherever their day takes them," says Shearer.

Wellblends are available at NatureMade.com and through such retailers as Target and Amazon.