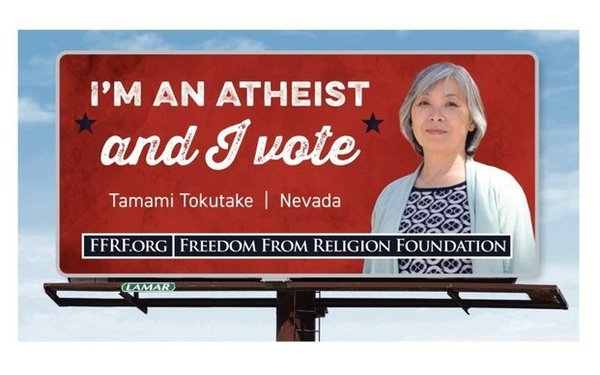 Just days after the Supreme Court made the separation of church and state a bit smaller in the case of a praying high school football coach, the Freedom From Religion Foundation (FFRF) will launch an advocacy campaign in 23 states over the July 4weekend, featuring both outdoor billboards and full-page Sunday newspaper ads in major cities.

States not covered this weekend will get campaigns underway by Constitution Day on Sept. 17, FFRF said.

The billboards picture nonreligious citizens of each state with such quotes as “I’m an atheist and I vote” and “I’m secular and I vote.”

In The New York Times, for instance, atheist music composer Brent Michael Davids says, "The 'Nones' (those of us unaffiliated with religion) are now 29 percent of the U.S. population. We are the largest 'denomination' by religious identification."

In the ad, Davids says religion should be kept out of government and social policy, out of public schools, and out of bedrooms, personal lives and health care decisions — including when or whether to have children, and whom to love or marry.

FRFF, which currently has 36,000 members, says that there are 75 million nonreligious adult Americans.

FFRF Co-President Annie Laurie Gaylor, the group’s co-president, noted that 98.8% of its members supportedRoe, vs. Wade and cited a YouGov analysis showing that atheists, at 91%, were most likely to identify as pro-choice.

"We're putting public candidates and officials on notice that secular voters are here, that we are the true 'values voters' and that it's time that our secular viewpoint be respected and represented," said Gaylor.